In Search of the Weavers of Khun.

Drive across the countryside in Maharashtra and north Karnataka and you will see beautiful rural women going about their daily work clad in beautiful Ilkal saris and a particular kind of self-designed bordered blouse made of the fabric called Khun, also called Khana in Karnataka.

While I did not get a perfect shot of a traditionally clad woman in a Khun blouse, I have taken this picture from this blog.
While my next post will be on the Ilkal sari weavers, in this post I will dwell upon Khun, which has come to be my favourite fabric. My associative memory with Khun has been with the bygone era in Maharashtra, which I haven’t experienced, but which has a particular sanctity seen through my urbanised eyes. Of women clad in bright saris, beautiful Khun blouses, wearing the crescent shaped bindi on their foreheads, bold women comfortable in their own skin.

My cook too wears Khun blouses on a daily basis, and while Pune markets are flooded with Khun fabrics, it is only last year that I decided that I must have Khun as part of my wardrobe. So I went on a Khun rampage and bought some meters of cloth in various colours, and got some sari blouses, crop tops and skirts stitched with them.

Given our fast paced city lives, we seldom pause to ponder over the people who have contributed to making a piece of fabric and clothing. Even if the clothes are machine made, there are people who choose the colours, design the cloth, and operate the machines. And in the case of Khun, where it is still pre-dominantly handloom, I couldn’t help wondering about the people who created this beautiful fabric. In all the shops I enquired, the shop owners weren’t sure where it was made, guessing it may be in Kolhapur or in Karnataka. But I wanted a specific lead, so I could go and meet the weavers.

You may like to read my post on the Ilkal sari weavers.
Finally, in a seminar I attended, Shefali Vaidya, a noted journalist, who is also a Khun enthusiast told me it’s made in Guledgudda and soon after, a lady at a stall in a handloom exhibition gave me the contact number of the person from whom she sources the fabric.
I immediately called up another friend, a long-time Khun lover asking if she could accompany me. Tickets were booked, leads were contacted and off we both went in search of Khun.
We first stopped at the home-cum-office of Sampath Rathi, who is a wholesaler of Khun and Ilkal sarees. His grandfather had migrated from Rajasthan to Guledgudda in 1924 and made this place his home. He has hundreds of weavers who buy the yarn from him and give back ready Khun and sarees and he charges a margin from the weavers. His cotton yarn mainly comes from Hindupur in Andhra Pradesh, silk yarn from Bangalore and artificial silk from Gujarat. So this works well for independent weavers who don’t have to get into logistics, but just buy whichever yarn they want and give him the ready cloth, which he then distributes and sells in various cities.

You may also like my post on Handloom weavers of Bhujodi.
Khun comes in combinations of silk and cotton, polyester and cotton and artificial silk and cotton. And in innumerable designs, motifs and patterns on the cloth. 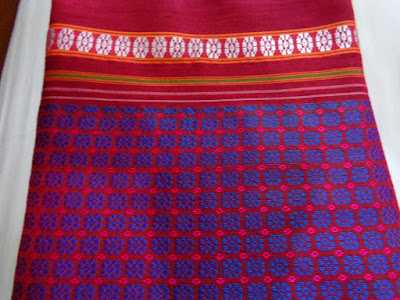 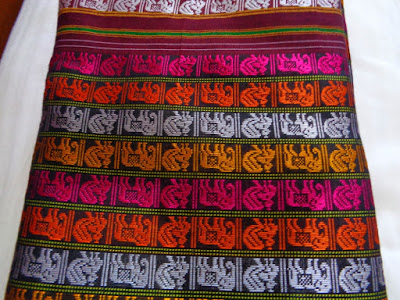 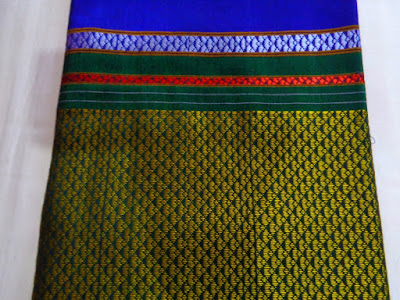 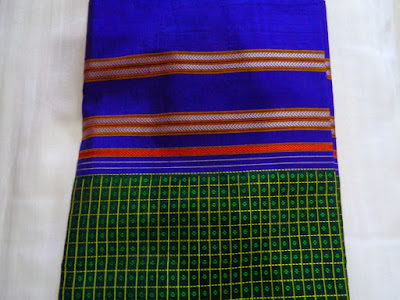 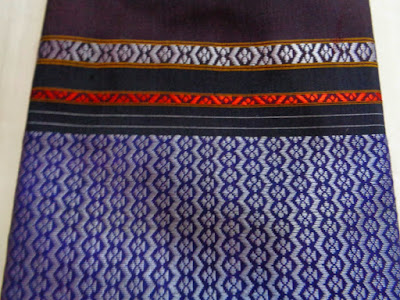 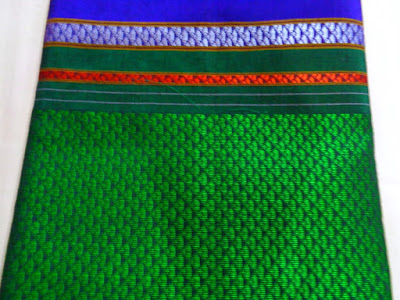 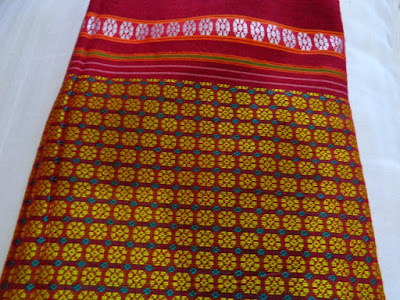 I had read one of Shefali Vaidya’s posts, where she mentions that Khun is called so, because ‘khun’ means sugar and this is a fabric worn by women in the sugar cane belts in Maharashtra and Karnataka. Sampath gave me a more technical meaning. He said khun is a unit of measurement. Khun means half a meter, so two Khuns make a meter of cloth. So one roll of Khun cloth has 44 Khuns, i.e, 22 meters.


I asked him how old Khun is, when did it start?  In textile history there are stories of weavers migrating to other geographies, to escape oppression of invaders (that’s more likely in India due to the Islamic invasions), or to escape drought or famine, and then combining their own weaves with that of the weaves of the new place and forming a new one. Did anything like that happen with Khun weavers? He had no answer. He said this is the first time that someone had asked him this question and said that it is at least more than a 100 years old, based on general knowledge of the area.


What makes Khun unique is that it is the only fabric which is primarily made only for saree blouses, hence the original width of the fabric is 31 inches, although now weavers have increased the width to one meter.
We feasted our eyes on the numerous bright shades of Khun
and Ilkals and also bought some.

It was already 1 pm by then. Sampath casually said that after lunch in his home we could go and meet the dyers. I was filled with gratitude. He did not wait till we asked him where we could have lunch. We were just travelers who had stopped by to meet him and buy a few things. Yet, he asked us to join his family for lunch. When I thanked his father, he merely said, ‘Atithi Devo Bhava’, the ancient Indian belief and custom which means, “Treat guests as God”. That’s the spirit of India, which still thrives in the villages and warms my heart.


After a hearty lunch, we visited the house of Motilal and Ambalal Ghanshyam Shah Chavan, brothers who are weavers as well as dyers. On the way to their house, we could hear the clickety-clack of handloom and well as power loom from the houses all around. They were in the process of dyeing yarn with bright red. They are the two out of the only five dyers left in the whole of Guledgudda. Their daughter promptly brought us some tea, and with their limited Hindi, they managed to explain the process of dyeing. Water is heated in a huge cauldron at a temperature of about 40 to 50 degrees Celsius. There were dye powders which are mixed to get the desired shade and colour. When we went they were dyeing a crimson red for which they mixed 10 gms turmeric yellow in 100 gms red dye. Interestingly the colour gets absorbed by the tarn and the water itself remains colorless.


The yarn is then hung on a steel rod and then dipped into the coloured water. It takes around 30 minutes for the colour to latch on to the yarn. After half hour, the yarn is squeezed and put in a dryer to quicken the drying. The dried yarn is then neatly combed and gathered together by hand to be used in a handloom or power loom. The Chavan brothers had a power loom running inside the house, so we went and took a look at it. The power loom makes around 20 meters of Khun per day whereas it takes around 15 days to make the same on handloom. That’s another reason why the handloom industry is struggling to survive.
We thanked the Chavan brothers and proceeded to our next stop, to meet the Mallagi brothers, both weavers of Khun. Both Siddharamappa and Jagannatha Mallagi have been weaving Khun since their teenage years, having learnt the craft from their father. They, too, didn’t know the history of Khunn and estimated it to be over 200 years old. They have around 6 looms in their house and all family members do weaving. All, except the next generation who have IT jobs in Bangalore. According to the Mallagi brothers, there is no bright future for Khun, as the next young generation migrates to cities in search of better pay and also because weaving is hard work and requires one to master the skill.. There are currently around 4000 weavers of Khun in Guledgudda alone, a huge decline from the 50,000 weavers in the early 2000’s. The average age of the Khun weavers is above 40 years.
I observed them working on the handloom and in the stillness of the house, the rhythmic taps and clacks of the handloom seemed poetic and musical.
The Mallagis specialize in pure silk Khun and use only natural dyes which are chemical free. Thus, the pricing is relatively higher, since the dyes are sourced from various places. The indigo dye, for example, is grown in Andhra Pradesh, which sends the raw material to Germany, where it is made into powder form and sent back to India. I wondered why there are no factories to do this in India !


A skilled weaver weaves around 3 meters a day and Rs 600 per day is the labor charge if they have weavers from outside the family. They manage to weave around 40 meters per month.
There was such a serene look on the faces of the Mallagi brothers. I asked them if they were happy doing this. They replied saying that weaving is what they have done all their lives and this is what they know, so they are happy. I could sense the contentment too on their faces, as I sipped on the fresh lemonade they offered. Here, too, we bought some meters of fabric and thanked them profusely for their time and hospitality.
I was inspired to illustrate my own version of one of Jamini Roy's paintings to represent Maharashtrian women in Ilkal and Khun with the crescent moon bindi and 'nath :-) Here it is. You may visit my art page, Purple Soul. I am taking orders for  prints of this work. Please contact me on priya@purplesoul.org for the same.


I wish more designers take up Khun as a project and convert this beautiful fabric into interesting contemporary wear, which will find a wider audience. While browsing, I found this blog with an interesting take on Khun, in the form of a trouser.
A friend, Vaijayanti, also a Khun enthusiast, wore a kurta made of Khun during the trip :-)
You may also buy directly from the Mallagis and from Sampath Rathi. Their contact details are given below. For those who are buying from the weavers/artisans for the first time, please DO NOT BARGAIN. I'm assuming others who buy from weavers, would not need that instruction as they would be sensitive to the work of the weavers and artisans and do not bargain over the price. The weavers put in a lot of work and time, not to mention years of expertise in creating a piece of cloth, so let's support them by paying whatever they ask for. You will need to know Hindi, to communicate with them.

We travelled from Pune to Badami by train, stayed at KSTDC Badami and hired a cab to go to Guledgudda, which is around 30 kms away. We also visited the ancient temple complexes of Pattadakkal, Aihole and Badami which I will be writing about soon.

Posted by Priya Krishnan Das at 23:09