I had the good opportunity to doing wall art at the Yoga Light Studio in Koregaon Park, Pune. The owners of the studio, Ajay Naik and his wife Haripriya wanted Indian motifs related to Yoga. So I drew the tortoise, the scorpion, snake, the Sun, elephants, lotuses and the conch, all bright and Indian :-) Working there has really inspired me to take up Yoga. Ajay and his wife teach the B.K.S Iyengar style of Yoga and Ajay has been teaching for the last 17 years. They also do customized and corporate programs. So if you are Pune and are considering learning Yoga, do check this studio..:-) It's in Lane 7, Koregaon Park. Their website is www.yoga1.in. 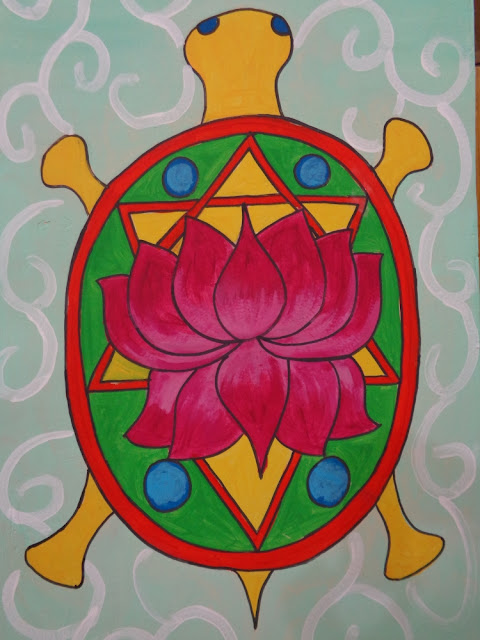 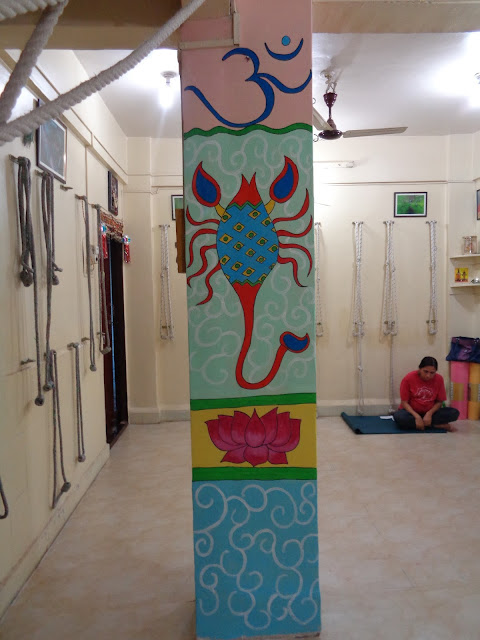 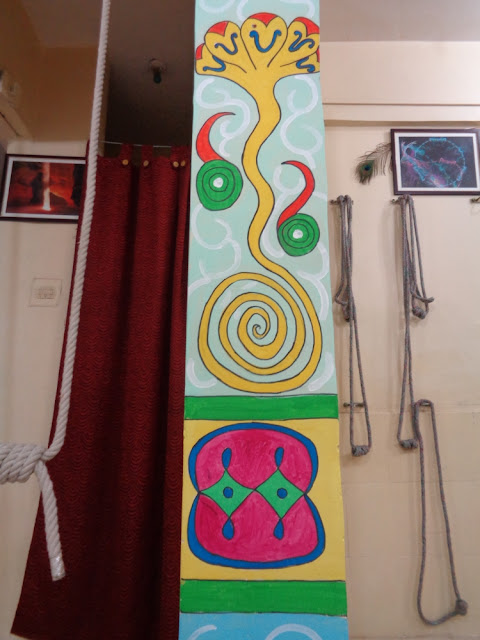 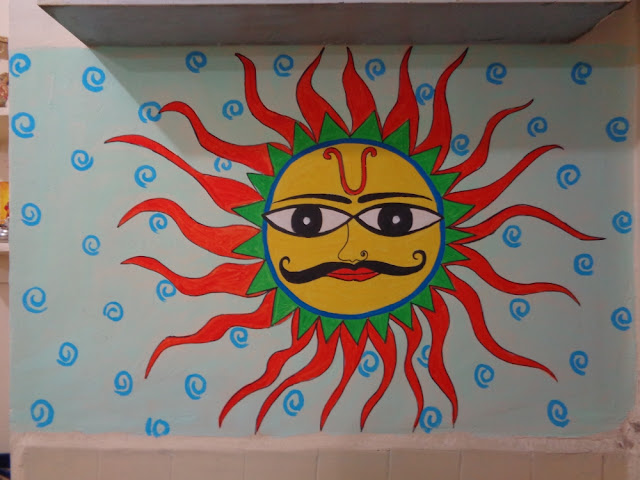 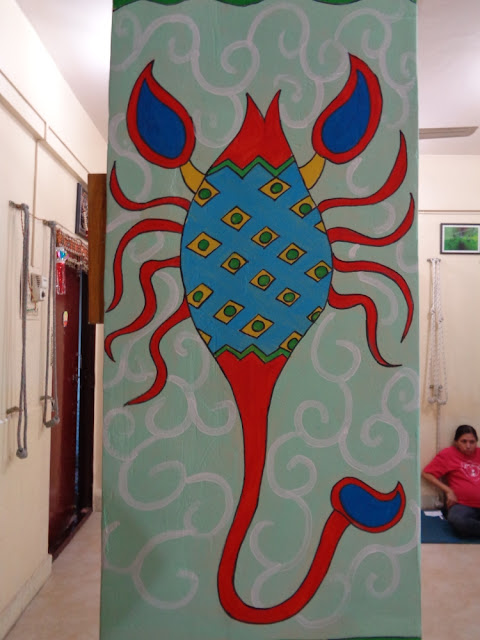 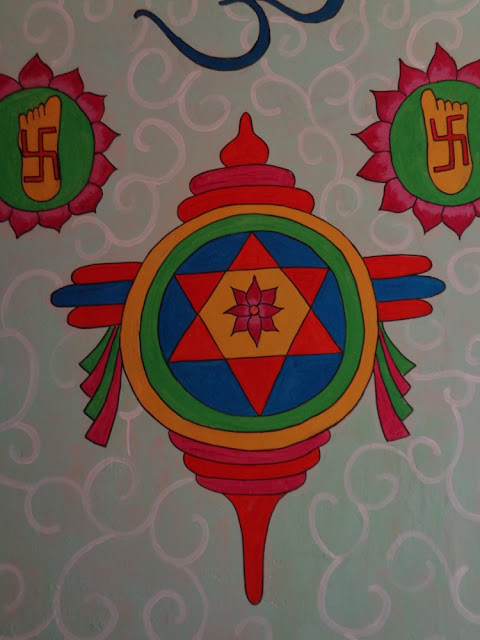 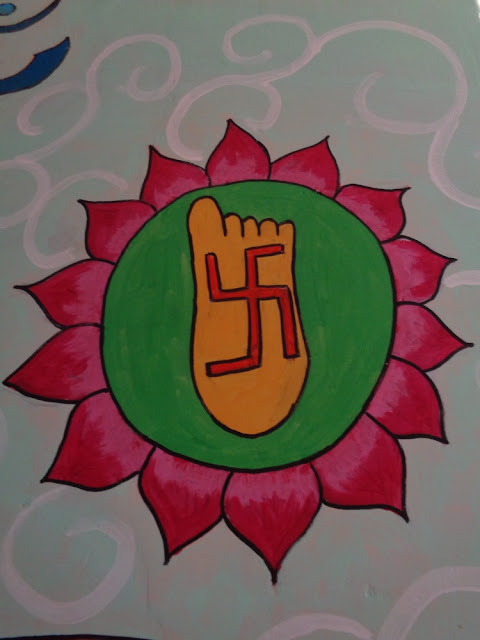 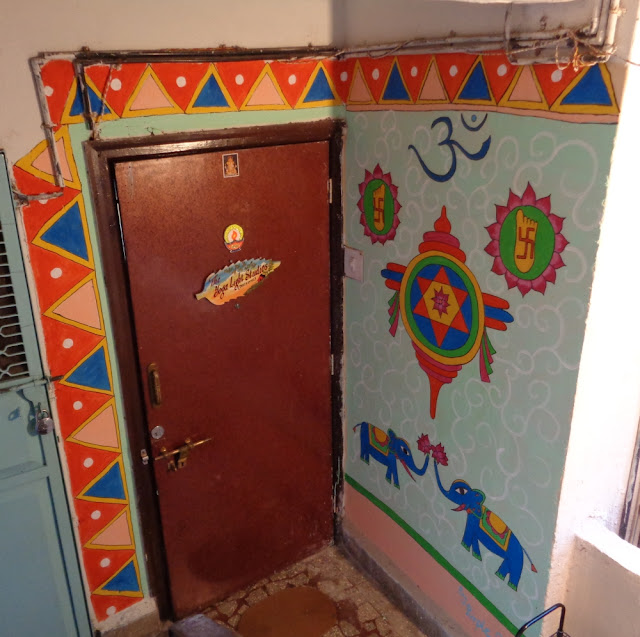 Posted by Priya Krishnan Das at 04:36 No comments:

It’s been over 4 years since we came to Pune, and although I had visited the Juna Bazaar twice earlier to pick up scrap for Recycling, I decided to visit again, but this time, with a traveler’s perspective. And I’m glad I did, because I could appreciate and observe the bazaar more than before.
The Juna Bazaar is a market for old and second hand goods, as the word ‘juna’ which means ‘old’ in Hindi, suggests. It’s a make shift market, stretching over half a kilometer, that is set up on every Sunday and Wednesday from 9 am to 6 pm on Veer Tanaji Ghorpade road in Kasba Peth.
If you are visiting this market be prepared to wade through the crowd and narrow spaces. I entered the market and was casually strolling and stopping by at stalls to take pictures and occasionally chat up with the sellers. I stopped at one antique seller’s stall and casually enquired from where he sources these antique items. Instead of answering my question, he asked me where I am from. I told him I’m from Pune but I’m visiting the market for the first time. (Yes, I know I lied!!). He laughed and said that he guessed that because the locals never ask that question. He invited me to sit on the footrest of the scooter that was parked next to him and I took a short leap over his precious collection and sat down. He proceeded to show me various items from his stall.

Some of the coins he showed me dated back to Shivaji Maharaj and Aurangazeb’s time, which is almost over 300 yrs old. He said he sources things from various places. The coins are usually from villages and farms and fields, because in the earlier days before the banking system, people kept their money safe by burying it in the fields, in pots. Some people also part with their own collection. A lot of interesting brassware was sold by people who could no longer keep up with the demands of this high maintenance metal.

The coins at his stall as well as in other stalls was priced between Rs 50 to Rs 300 depending on its antiquity.

I asked him how old this market was. He said the market has been thriving since the reign of the Peshwas, since over 300 years. He said he is in his 60’s now and remembers tagging along, as a young child with his grandmother, who herself had been selling antique items at the bazaar for a very long time. My guess is that when the city started expanding, the oldest original market of Pune, which was outside Shaniwarwada, diversified around 150 yrs ago, into the vegetable market at Mandai and the Juna bazaar for second-hand items.
If you visit the Juna bazaar, do visit this friendly seller, Nizam Bhai, who offered me tea and also showed me a few clippings of newspapers and magazines in which he had been mentioned. I thanked him for the information and his hospitality and proceeded to explore the other stalls.


The antiques range from interesting brass home décor items like vases and lanterns, door knockers shaped like lions and elephant heads, scorpion shaped wall-pegs, to kitchen items like tortoise shaped vegetable graters and artistically designed betel nut crackers and boxes to miscellaneous items like a 1920 model of a Marine telescope, a brass coal iron and a receptacle shaped like a cow for offering holy water. Prices ranged from Rs 250 to Rs 3000 depending on the item.


I chatted up with another seller and he told me that not all items that are labelled as ‘antique’ are actually antique. There are factories, mostly based in Delhi, which manufacture copies of the original antique pieces.

Apart from antiques, you also find other second hand household goods like refrigerators, blenders, pots and pans and stoves, and electronic appliances like computer parts and television screens, phones and also car batteries and type writers! There are also various second hand tools like spanners, axes, shovels, chains and pulleys for construction work.

Although it is Juna bazaar, you also have some stalls selling new items like suitcases, bags, goggles and eyewear, shoes and apparel.


If you are tired after walking around, there are stalls that sell vada pav, cucumbers and lemonade.


Things to keep in mind if you plan to visit Juna bazaar:
·         The market is open only on Sundays and Wednesdays between 9 am to 6 pm.
·         Be prepared to walk around a lot.
·         Carry water to keep yourself hydrated. I did not see any shops selling bottled water.
·         I usually don’t bargain, although others would recommend it. Use your discretion.
·         Go through the antique section carefully. There are many interesting items and unless you look closer, you wouldn’t know what it is.
·         Enjoy the experience.

I grew up watching my late grandmother dexterously decorate the space outside the main entrance of the house, each morning, with 'kolam', the South-Indian term for rangoli. In Palakkad Iyer homes, as well as in some other South-Indian communities, kolams are drawn with rice flour, either dry or wet, and 'kaavi', which is a soft red brick with lends the bright red-oxide colour. Hence kolams are usually white and red. The designs are mostly geometric designs, ranging from simple to complex, doubling up as mandalas, to converge positive energies in homes and keep out dense energies. One variation is the dot kolam where dots are drawn first and then they are either connected or looped across. It symbolizes the interconnection between everything in the Universe. For auspicious occasions like weddings and festivals, kolams run into several feet in length and width, drawn by skilled women, to whom it is second nature. I had to practise this many times in my note book to get the dots and loops right. I wish I had taken an interest when my grandma used to urge me to draw and learn the kolam designs from her. When, at a community centre I was asked to do a wall-art next to the gate, I thought of a vertical kolam/ rangoli on the wall, which blends perfectly with the stone idols of the Gods, reminiscent of temples in South India. That, with the bamboo trees around, to make the setting perfect. :-) I dedicate this wall-art to my dearest Grandma. 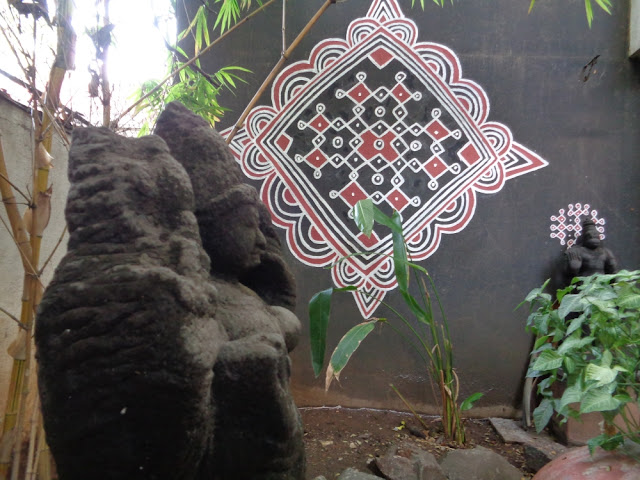 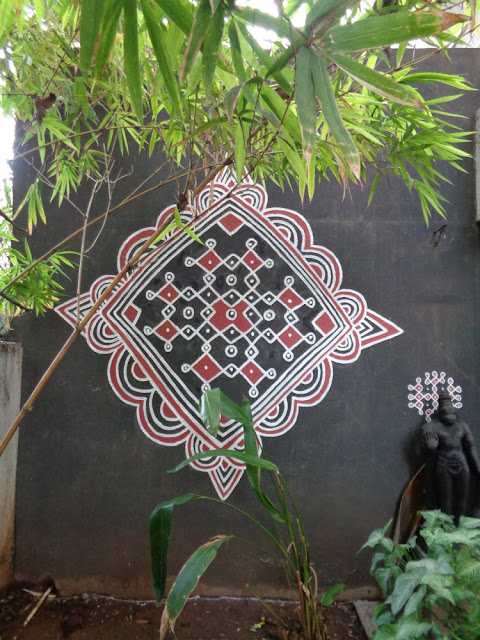 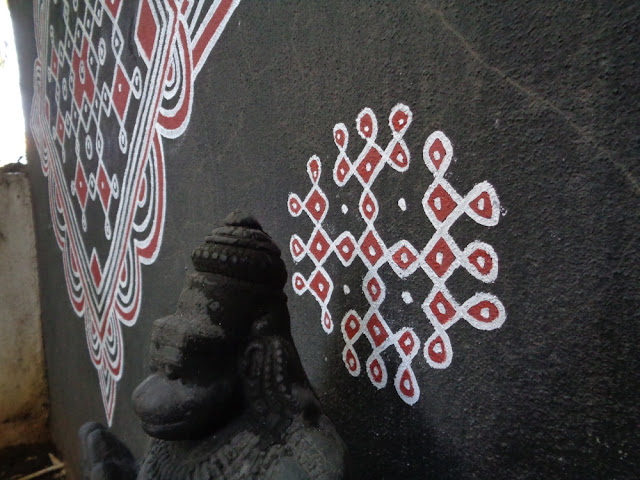 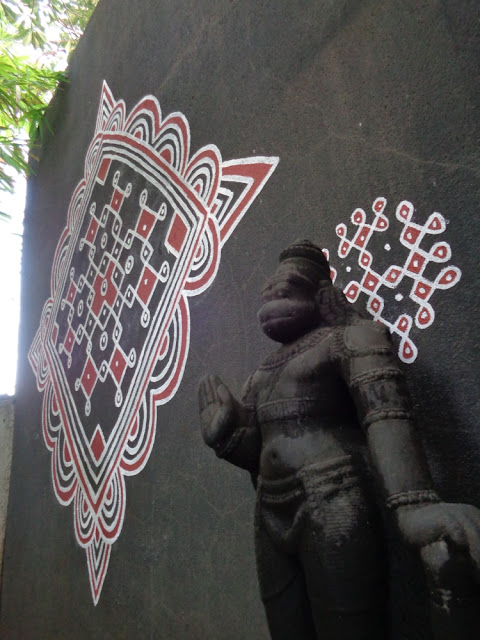 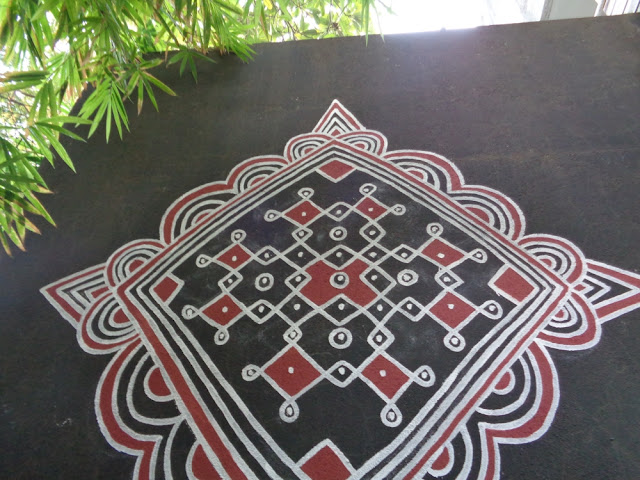 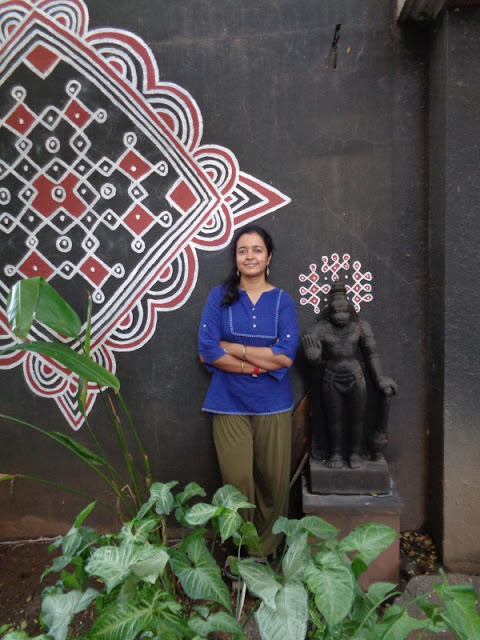 Posted by Priya Krishnan Das at 04:52 No comments: