Note on the Pottery of Kutch.

After visiting the Dastkari Haat in Pune, where artisans from all over the country come to sell their wares, it occurred to me to put together this short note on the art of Pottery in Kutch. My visit to Khamir, in Kutch, had fortunately coincided with a pottery exhibit of the region. I had never known that vessels made of clay and mud could be used for regular cooking. While I lost quite a lot of photos which I had taken of the exhibit due to some error, I have managed to salvage some and I have tried to compile details from my memory too.
The art of Pottery pre-dates recorded history, as even before the discovery of metals, it was mud and clay that was easily available and used for fashioning vessels/containers for cooking and storing. During my stay at Khamir, I was also fortunate to attend a talk given by none other than the chief Archeologist, Prof. R.S Bisht, who led the excavation of the ruins of Indus Valley civilization, at Dholavira, in Kutch.

He showed us slides and photographs of remarkably well-preserved pieces of pottery, with exquisite designs and patterns which he had excavated. The most interesting part is that the same motifs and patterns are used even till this date in the pottery of Kutch. One thing that particularly caught my attention was a disc with motifs of fish. And the colour of the design was blue. The Prof said that oxygen supply was cut off to the kiln to lend the items that colour. Later during my stay, when the Director of Khamir, Meera, asked me to do a mural in their campus, I incorporated the same fish motif and other patterns of pottery.
The exhibit had vessels for everything, right from kulads for drinking beverages from, to pots and pans for cooking anything ranging from lentils (daal) to rotis (flatbread) in. Even the skillet for making rotis were made in different sizes, the largest being used by the nomadic tribes to make bigger size rotis as they would have to walk a lot before the next break for food. There were pots stacked one of top of the other in decreasing sizes, starting from bottom, used to store grains, cereals, and grocery. Then there were pots for storing buttermilk, curd and other beverages. There was even a particularly shaped pot which could be used for transporting water and beverages during travel. Sorry I don’t have the picture of that. 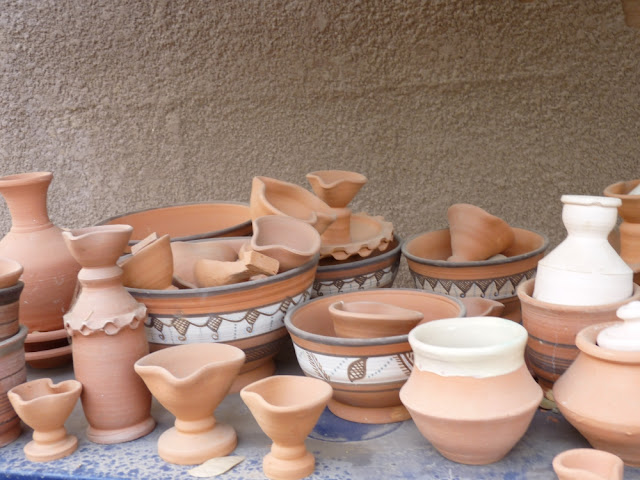 Pottery had an important role to play even during rituals and rites of passage. The pots and clay items presented to the bride during the wedding were shaped differently from the ones used during a funeral. But there was one thing common to all the items made, and that was the intricate patterns on the items.
You will also notice that different items are of a different colour. Some are whitish, whereas some others are red, brown, and so forth. That's the colour of clay sourced from different places. The choice or colour of the clay used depends on what the end product would be used for and the availability of the same locally. The clay is then moulded into the desired shaped either on a wheel or by hand and allowed to air dry for a while. The patterns on the items are made using a thin brush and using a watered down clay of a different colour, commonly known as a ‘slip’.  Then the coloured slip is applied of the desired pattern and design. This is then baked in a kiln. The temperature of the kiln is also set depending on what the end product would be used for. You must be aware that some pots are used as musical instruments. For such and other purposes requiring durability and strength, the clay items are baked at a higher temperature and for some others not very high. In earlier days people used wood fired kilns, but now-a-days, electric kilns are used, like the one I saw at Khamir. In the electric ones, the temperature can be set between 400 to 1500 degrees Celsius depending on the type of clay and the product.
Clay vessels and pots are not only beautiful and as old as civilization itself but it’s also the most eco-friendly. In today’s markets, flooded with cheap plastic goods, the potter community is steadily shrinking and also struggling to keep their art and skill alive, as their children move to the cities in search of well paid jobs. As soon as I returned from Kutch, the first thing I did was go and buy an earthen pot for storing and drinking water from, which I had never done before. That was the least I could have done to support the potters of India.

Posted by Priya Krishnan Das at 01:20