Visiting a Temple built by the Pandavas- Hateshwari Mata Temple.

After my joyful stint at apple harvesting in Ruhil dhar, we boarded a bus back to Kharapathar, where I volunteered for apple grading. The bus was to ply till Hatkoti, from where we had to board another bus going to Kharapathar. That was a great opportunity to visit the famous Hateshwari temple in Hatkoti. My host and I walked for half an hour from the Hatkoti bus stand and reached the temple amidst a slight drizzle of rain.
This ancient temple, built on the banks of the Pabbar river, is dedicated to the Goddess Hateshwari, a form of Goddess Durga. While there are no written records about the construction of the temple, some believed that it was constructed by the Pandavas who spent a considerable amount of time at Hatkoti, during their exile. Some others believe that the temple was built by Adi Shankaracharya. Based on the style of architecture and sculpture, historians claim that the temple must have been built during the reign of the Guptas, between 6th and 9th century AD. 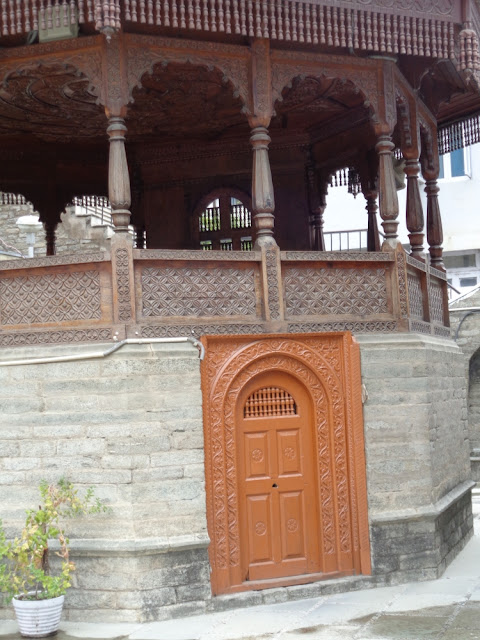 The entire structure, I observed were made either in wood or stone, or a combination of both. I was particularly in awe of the intricate carvings on the wood, especially on the ceiling, inside the temples. And they have been remarkably well preserved, considering that the temple is several thousand years old. Photography wasn’t permitted inside the sanctum sanctorum but I’ll try my best to describe the Deity.
The form of Goddess Hateshwari is beautiful with eight arms and is believed to be made of an alloy of eight metals.  It is also said that there are inscriptions in the sanctum sanctorum in the Brahmi script which is yet to be deciphered, but I couldn't spot them as it wasn't very well lit inside. The local people believe that no one has been able to view the feet of the deity, as they believe it touches the river Pabbar, on whose banks the temple stands. Another story which supports this belief is when the Gurkhas, in the early 19th century had established their stronghold in parts of Himachal Pradesh and wanted to move the deity to another place convenient for them. The Gurkhas dug for hours on end and days together, but couldn't move the idol by even an inch, since the feet were buried too deep to be dislodged.
Outside the doorway of the sanctum sanctorum, you cannot miss spotting a huge bronze vessel tied with a chain next to a beautiful idol of Lord Ganesh. Legend says that there used to be two vessels instead of one, at the doorway, but many years ago, a fiery rain storm caused the river Pabbar to overflow and carry away both the vessels. The pujaris (priests) of the temple tried their best to rescue the vessels in the thunder and rain storm but could succeed in finding only one, which is tied near the doorway. 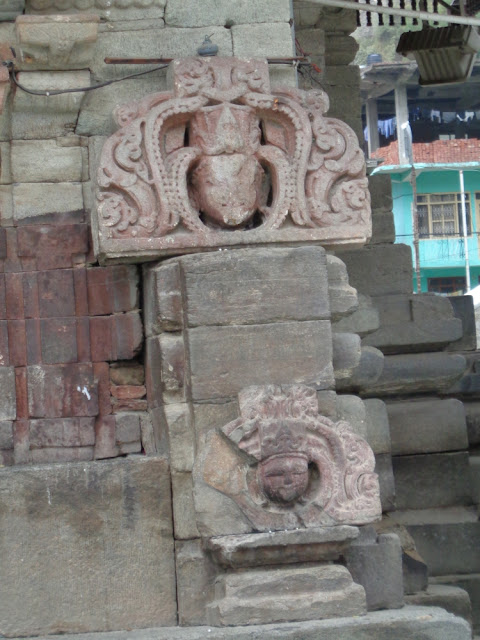 To the left of the sanctum sanctorum is the temple dedicated to Lord Shiva, with exquisite carvings on stone and wood. There is a Linga inside, and somehow the ambience, serenity and the dark interiors transported me 1000 years ago, when it would have been just the same, even then.

Further to the left of the temple premises, there are 5 stone structures, locally called ‘Deols’, representing each of the Pandavas. I loved the carvings of figures and motifs on stone on these too. The two majestic bronze statues of lions guarding the entrance to the sanctum sanctorum made for a lovely capture.
Feeling awed by the serenity and the rich history and mystery of the temple, we sat inside the premises for some time, before leaving,  enjoying the landscape dotted with the greens of the forest, whites of the clouds and colours of human habitation.
If you have enjoyed reading this post, you may subscribe to new posts updates via email. Enter your email id in the 'Follow by email' on the right hand side panel.

Posted by Priya Krishnan Das at 23:33