In 2011, when my husband announced that his company is transferring him to Pune, I jumped with excitement. The first thought was, Pune is where the Maratha warrior king Chatrapati Shivaji grew up in, and freedom fighters like Veer Savarkar had their base in, and I'm going to be in that place. I had enjoyed history immensely in school, so much so that while the History teacher narrated tales of wars and freedom struggle, I almost went back in time, lived the story and came back fully charged.

When I got to know that The Western Routes organizes the Pune Heritage Walk, I was eagerly waiting to join. That time finally came in February this year. My husband and I, along with an Indian friend, his Japanese wife and adorable child set out on a fine morning to discover the heritage of Pune. The walk was conducted by the founder of The Western Routes, Jayesh Paranjape, a very friendly and informative person. Do dig up information on the best places to eat in Pune, if you ever happen to meet him..:-)

The trail took around 4 hours and Jayesh took us to some wonderful places to eat too. (read misal pav, sabudana wada, aloowadi and endless glasses of fresh sugarcane juice)

This post is more of a picture story, for I strongly recommend that you participate in the trail yourself if you get an opportunity, for all the juicy details from history..:-)

The entrance to the Shaniwarwada fort, which was constructed in 1746 and was the seat of the Peshwa rulers. The houses inside were made of wood and were destroyed in a massive fire in 1828, so one can see only the foundation of the buildings which were made of stone. The foundation stone of the fort was laid on a Saturday that is why the name 'Shaniwarwada'; 'Shaniwar' meaning Saturday and 'wada' meaning , houses. 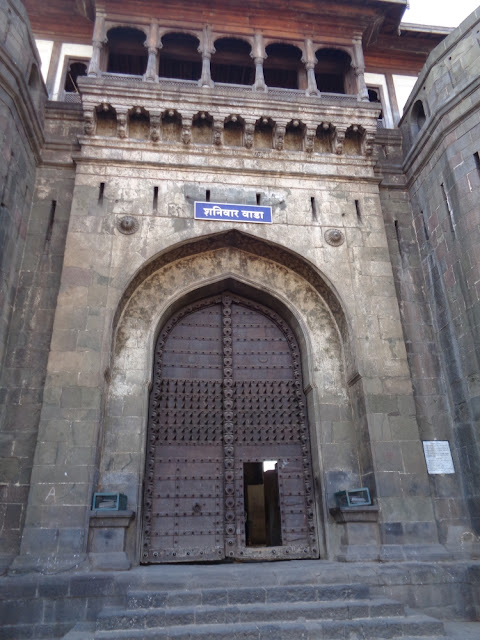 This is the close up of the gate of the Shaniwarwada. There are huge spikes on the surface to deter the elephants from the enemies side from tearing down the gates. 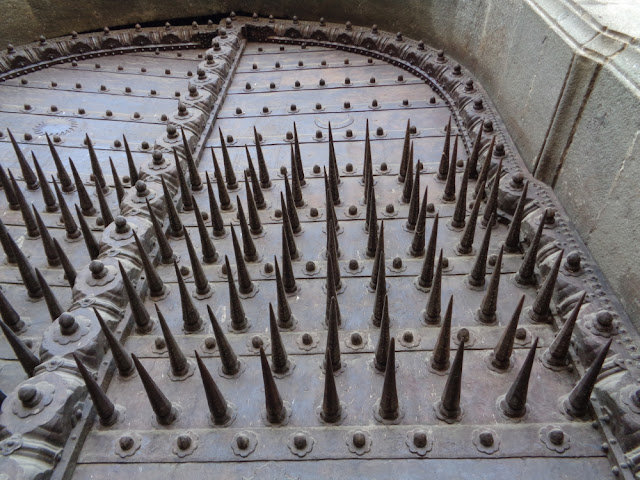 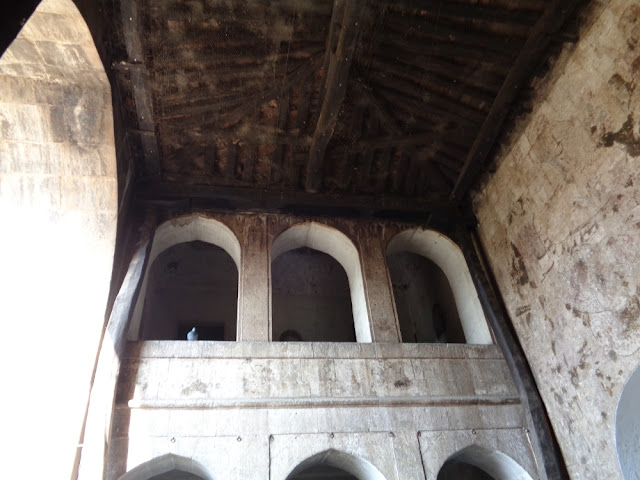 The events pertaining to Shaniwarwada  listed chronologically on a marble stone. It's an interesting piece of information that the ruling Peshwa, Bajirao, had a second wife, called Mastani, and since she was not very welcome in the family, there was another entrance gate made dedicated for her, and she could not enter the fort from any other gate. Their story had now been made into a Bollywood movie by the name 'Bajirao Mastani'. 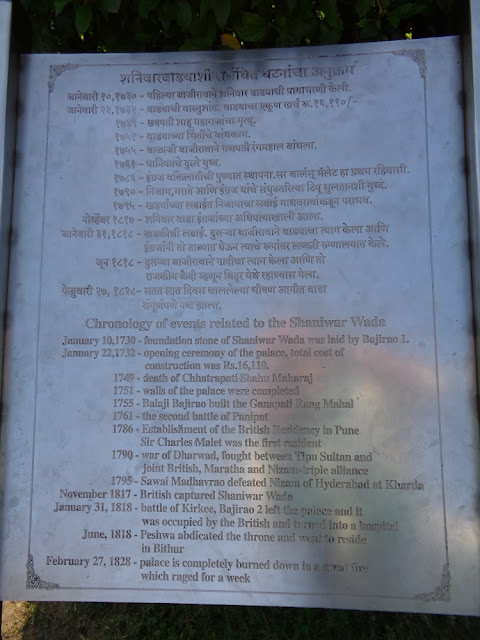 The family tree of the Peshwa rulers.. 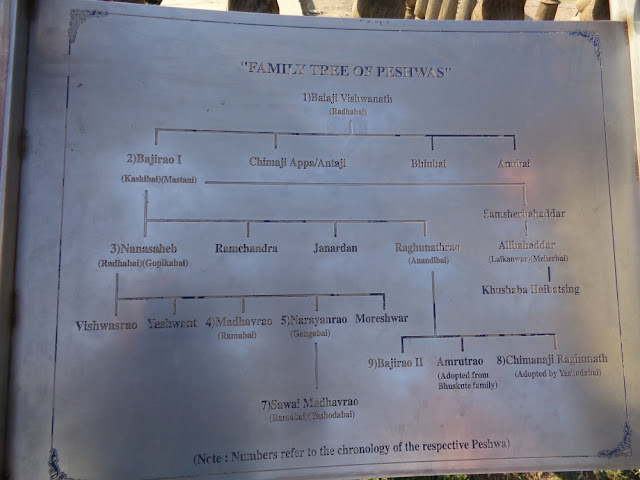 The stairs leading to the upper floor and rampart.. 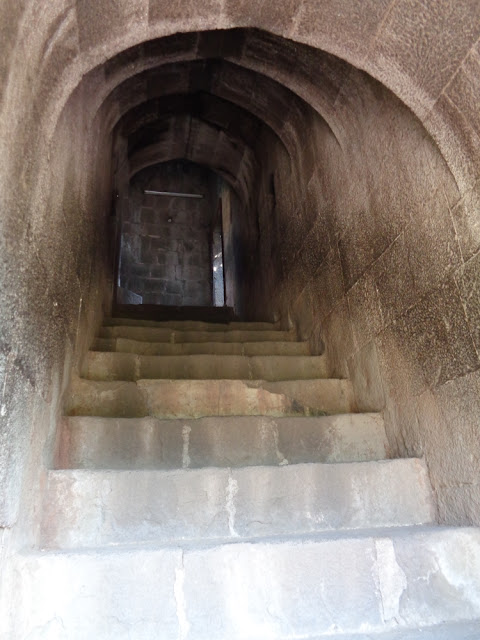 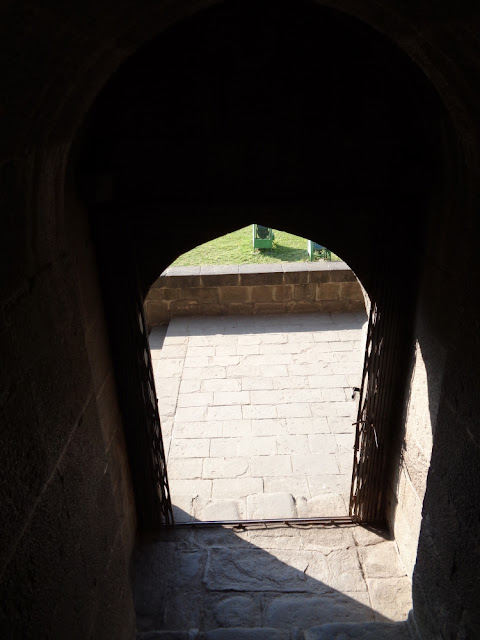 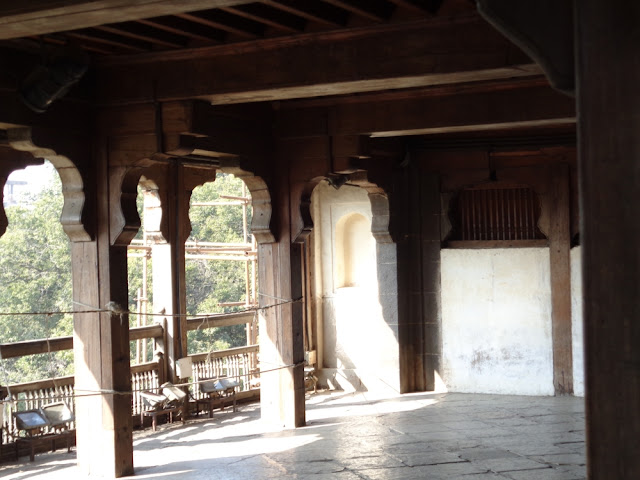 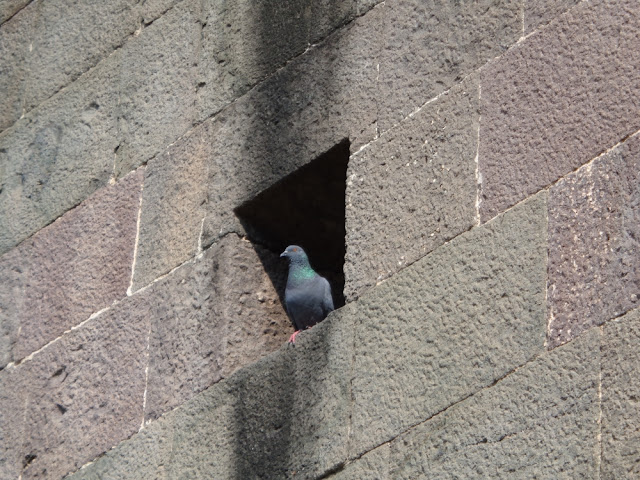 The picture below is of one of the houses in Kasbapeth. Notice the old Pune style of architecture juxtaposed with Queen Victoria's image on the metal railing.  This was to show the family's loyalties to the British during the pre-Independence era. 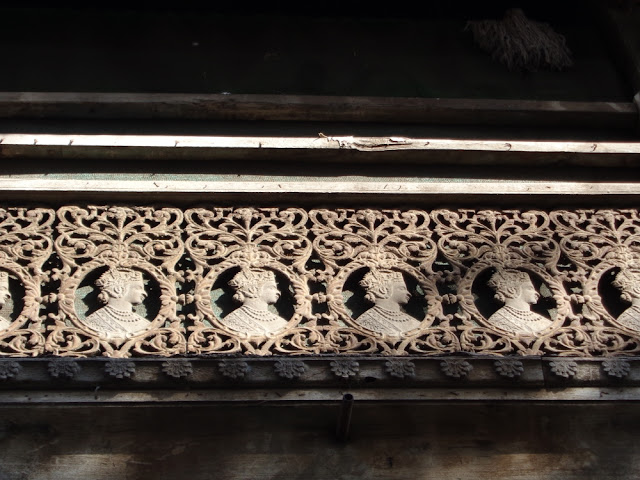 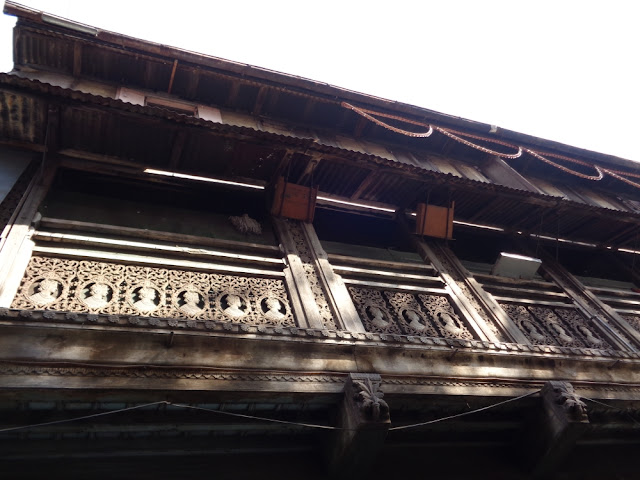 This is the Kasbapeth Ganpati, which is a 'swayambhoo' Ganpati, meaning the stone naturally assumed the form of the Elephant headed God, Ganesha. It is said that when Shivaji along with his mother, Jijabai, arrived in Pune to settle down, the Ganesha appeared around the same time in one of the ministers backyard. When the news was conveyed to Jijabai, she took it as an auspicious sign for her son, to make Pune as one of his main bases to rule the kingdom. Photography was not permitted inside. The architecture and the wooden carvings and beams inside are still well preserved even after 400 years. 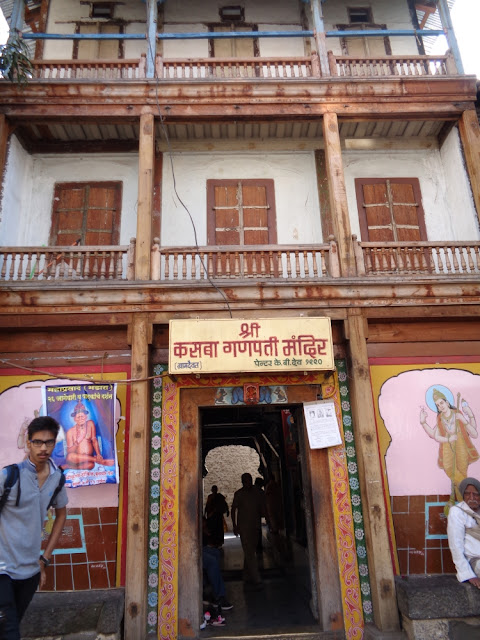 Notice the inlay of brick work. Pune, in those days was known for brick making and bricks were custom made according to its use. You will also notice how the bricks are arranged, some vertically, some horizontally. That was unique to the houses of old Pune. It was only after the British arrived that the brick size was standardized, as was the laying of, of the same. 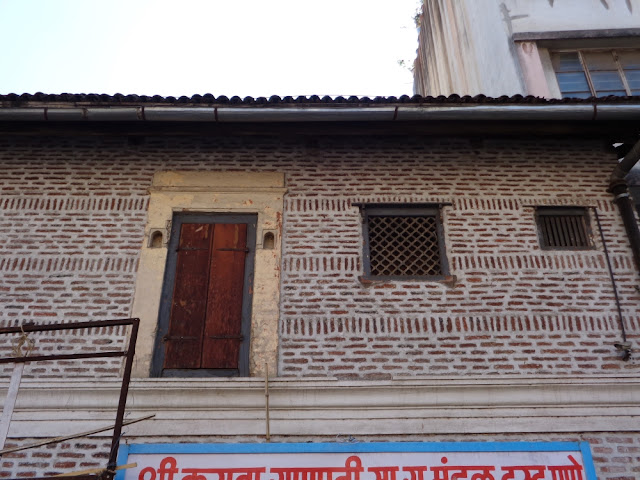 One of the wadas in old Pune.. 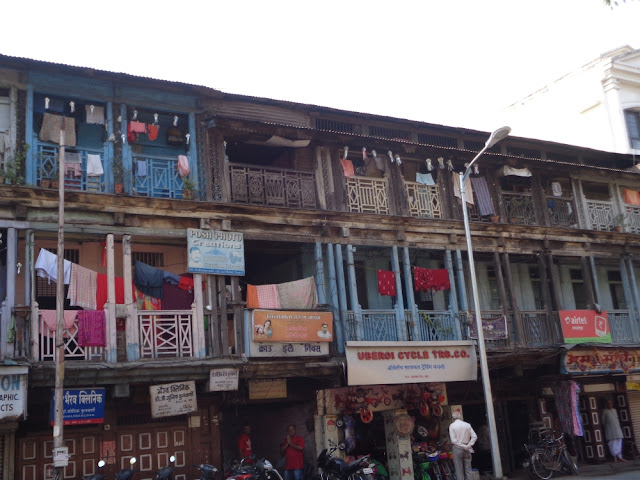 Nanawada, where one of the important Peshwa ministers, Nana Phadnavis lived. It was built in 1780 and now the building functions as a school. 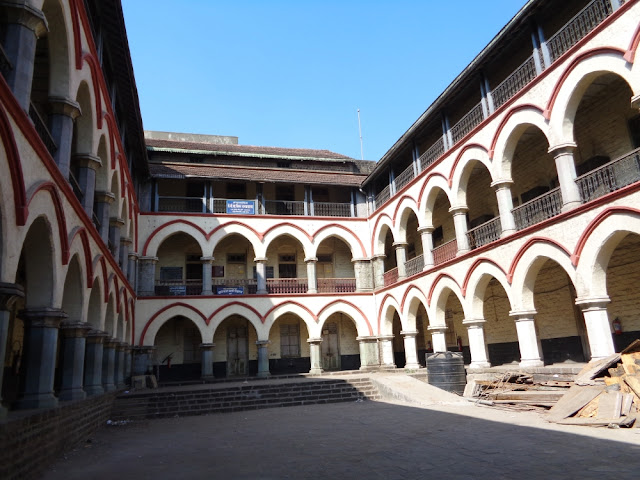 Look closely at the photo and you will see the image of a banana flower (kelphool) carved on wood. This is a recurring motif in Pune's old architecture and was used in all the houses, temples and forts. 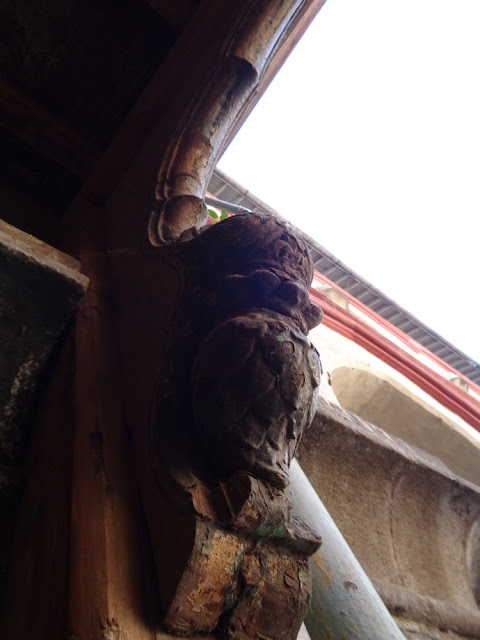 This is an unusual image of Ganesha, killing a demon with one of his tusks. 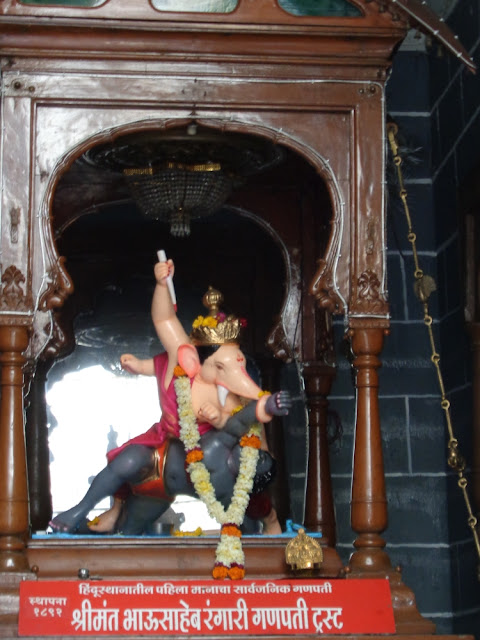 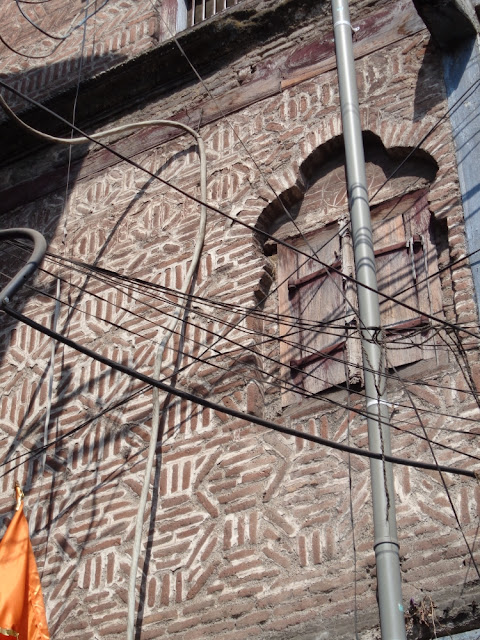 The riot of colours in Mandai, the wholesale market... 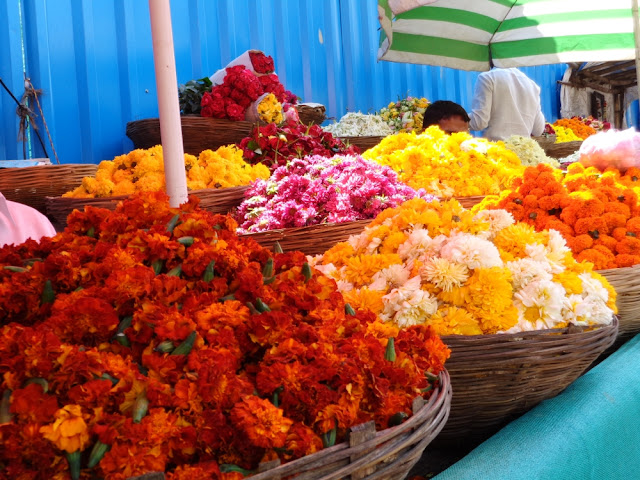 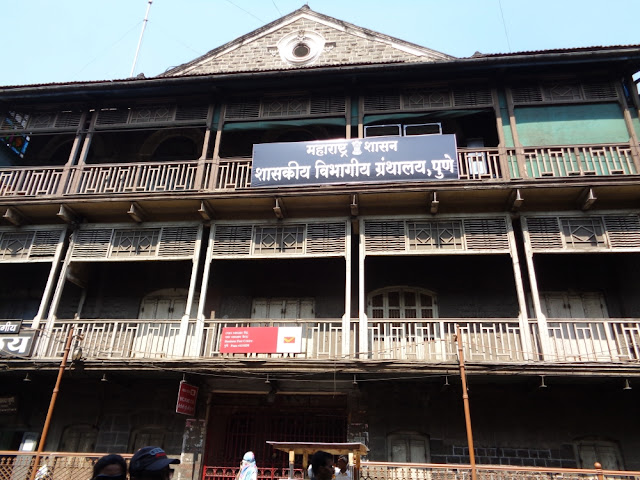 The entrance to Visharmbaug wada, which was home to Peshwa Bajirao, the second. 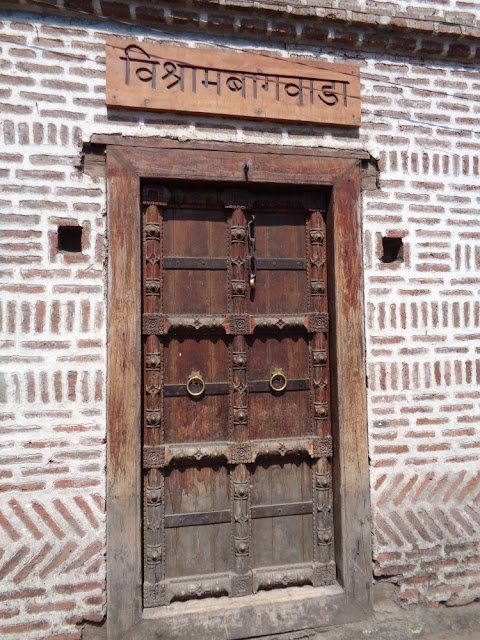 The place was being renovated so we could see the upper floors, but I loved the vibrant colours and the wood work from whatever I could see... 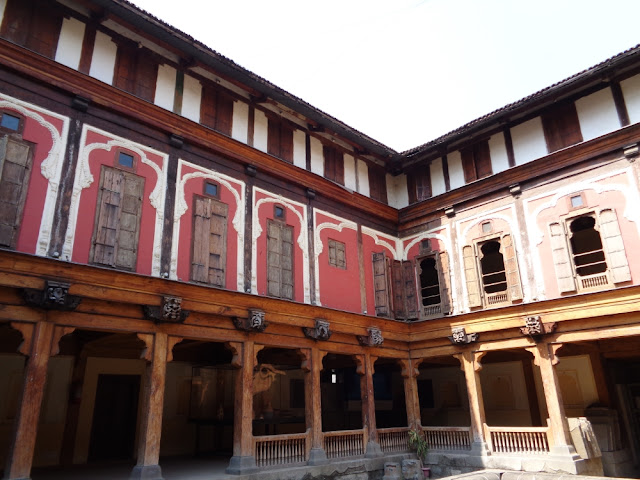 An old well inside.. 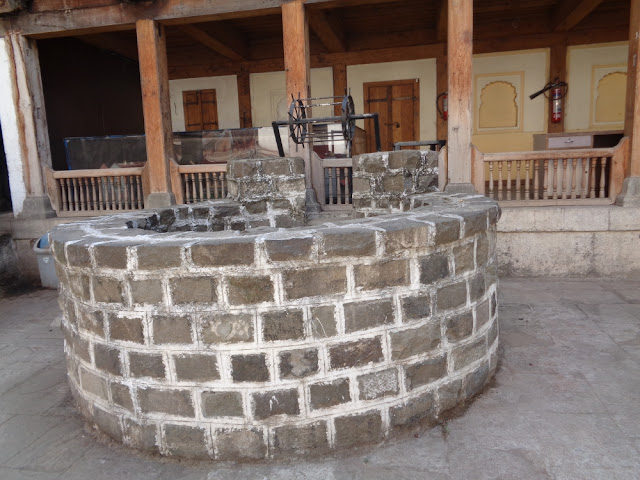 The Indian gargoyle outside Vishrambaugwada..Notice the motif of the banana flowers here too..:-) 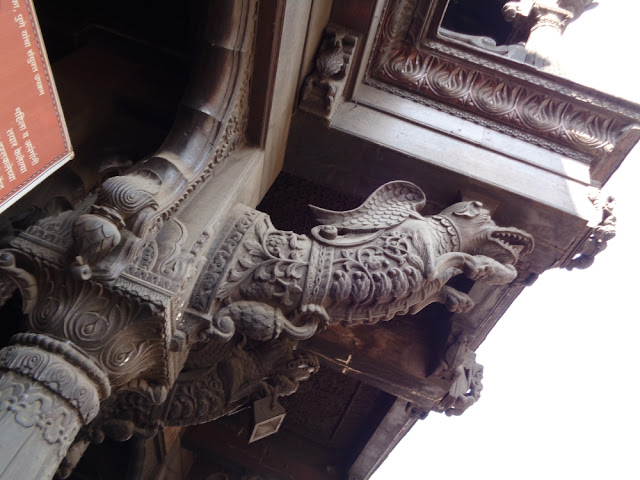