Travelling in a Local Bus in Himachal.

I’ve been in Pune for over 4 years, but I’ve never travelled by a local bus, though I intend to very soon. But on the very first day I landed in Himachal Pradesh, I took a local bus to the Mall road in Shimla to meet a friend. I was told that local buses are usually crowded in Himachal. And I hate to travel in crowded public transport. But I was in for a pleasant surprise. The bus was crowded, but as soon as I boarded, a girl sitting next to me, offered to hold the bag I was holding, so I could stand steadily as the bus negotiated the bends and curves which is typical on mountain roads. In the next 5 minutes, a gentleman who was about to get off at the next stop, called me and offered me his seat.  Wow! And when my stop came and I got down, another gentleman called out to me to caution and inform that if the cops see the plastic bag I was carrying, I could be fined. He said plastic bags were banned in Shimla. That was such a thoughtful gesture. He could have easily ignored and walked away, but he chose to inform me about this. 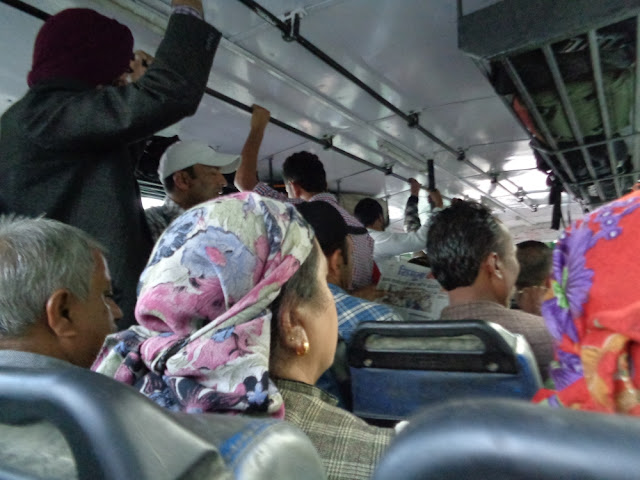 The next trip on a local bus was on the second day, early in the morning at 6.30. This was a longer ride for 4 hours. We had got the last seat and I was asked to be mentally prepared by several people for the bumpy ride ahead. Well, the ride was bumpy for sure. The roads were, well, not roads at all, but more of a dirt track. In some places, it was so bumpy, that we were flying high on our seats, at every bump. I was told that this ride would leave me extremely fatigued. But that was not the case. The reason being, instead of tightening my body and going stiff, in order to not fly and oscillate, I let my body relax, breathe deep and allowed it fly and oscillate. That really helped, or else, my back would be borne the brunt of it all on the last seat. So just relax your body instead of tightening up on bad roads. That’s a tip I discovered and you may try that as well! 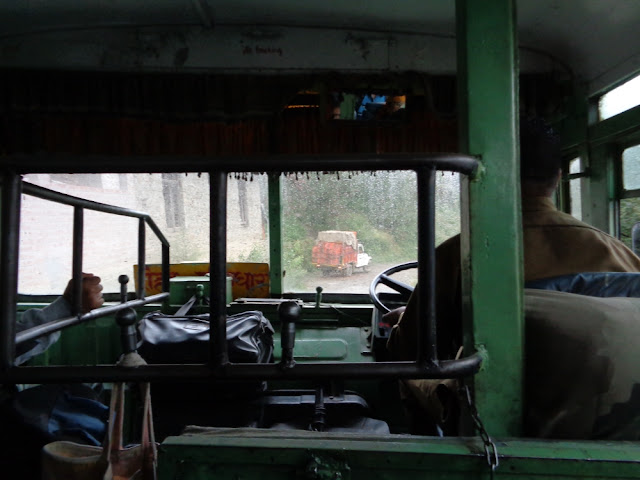 The road being more of a dirt track, there was dust all over, outside as well as inside the bus, though the glass panes were shut. So much so that the color of my maroon jacket turned a pale grey!!
The next ride I took in a bus, we had to get down at Hatkoti, where we visited the Hateshwari temple, and again board another bus to our final destination. As soon as we boarded the next bus, within 5 minutes, the tyre got punctured and people got down without a murmur. Had the same thing happened in a city, people would have grumbled with an irritated expression plastered over their faces. But here, people got down with a sign of resignation to move on to other things. I had observed the same thing while I was in Spiti too. Road blocks due to bad weather, accidents, etc is a usual thing and people just resign to Nature and Time without any anger.
I had another opportunity to travel to the Mall road, Lift stop, from my guest house. This time as soon as I boarded, a gentleman gave up his seat for me. To return his kind gesture, I offered to hold his bag this time. I am not sure if he was worried I may fall, seeing the way I was trying to find my balance, but I thanked him profusely. 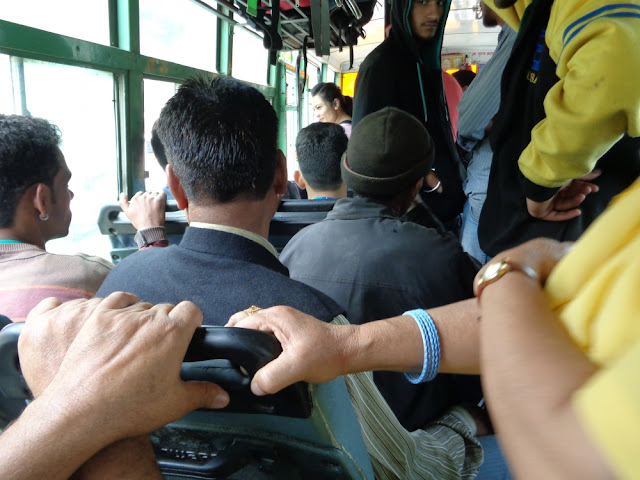 The last trip on the road, again, the longer one, was not by bus, but in a car, but it deserves mention here. In some places there was muck due to rainfall the previous day, and we saw trucks and buses stranded on the way. On that stretch, the other passengers in our car got down, so the car would be lighter and we walked in ankle deep muck and slush. Luckily, the muck had dried a bit, but we had to watch our step.
This is not in any way to complain about bad roads. Hats off to the local people who travel often on these roads without complaining! It was an experience for me. I saw people cheerfully greeting each other in the bus. Women with colorful head scarves called ‘dhaatu’ and interesting patterns on their sweaters and jackets and men with the traditional Himachali topi and traditional but stylish jackets boarded and un-boarded. The bus journey was almost a metaphor for life. Be undeterred by the bumpy roads, because life goes on, no matter what!!

Life in a Himachali Farm.

Since my childhood, I’ve always fantasized living on a farm. May be it had to do with the fact that I grew up on Enid Blyton books, where kids go for fruit picking and chase geese and calves and carry pails on milk. That’s one of the reasons I seek out farm stays, to live out that fantasy, albeit for short periods.
I got the opportunity to stay on 2 orchard-farms during this trip to Himachal and loved every bit of it. All houses in Kharapathar and Ruhil-dhar, where I volunteered for apple harvesting and grading, are farms too.


The houses in the villages I visited were made the traditional way, primarily of wood and stone. That’s because wood was in abundant supply in Himachal, which had and still has a dense forest reserve. The houses are two storied with the lower floor housing the cows, called the ‘gaushala’ and the upper floors serving as the residential area, the store-room and for the kitchen. The roof is sloping allowing the snow to fall off and is made with slate stone which also serves to weigh down and protect the structure against strong winds and storm. Traditionally, bathrooms and toilets were constructed outside or detached from the main residential area of the house, although now-a-days, they are constructed at one end of the house.


Every house has a minimum of 2 cows, which supply abundant quantities of milk, thanks to grazing on rich grass growing on rich soil. If there is milk, there has to be butter and ghee, which are used in copious amounts at every Himachali meal. Butter and ghee is served with almost every dish and ghee is poured from a kettle not with a spoon!!


I noticed that cows occupy a prime position in Himachali homes. A member of the family or a hired person is dedicated to taking care of the cows. Duties include taking the cows out for grazing and milking them twice a day, cleaning the cow shed, ensuring that grass is given when cows are in the shed and attending to miscellaneous needs of the cows. The first flat bread (roti/chapatti) that is cooked at home, each day, is fed to the cow. Also vegetable and fruit peels, but never left over food, is collected and give to the cows. Taking care of cows is not an easy task in terms of the energy and money spent, but still people keep them and they are well taken care of. In the farm at Ruhil-dhar, there are 6 cows, out of which only 2 give milk. But they are lovingly taken care of as much as the milk giving cows and there is a reluctance to give them away.
Now, to talk about the vegetables grown in the farm. I think that’s the best part of staying in a farm. You reap what you sow, literally, and eat food fresh from the farm to your plate. Almost all vegetables that can be grown in these areas, are grown on the farm. Potatoes, colocasia, tomatoes, green chilies, brinjal, bottle gourds, cucumber, pumpkin, bitter gourd, not to mention apples, apricots, and also other things like beans, corn, etc. It felt so wonderful that you decide what you want to eat in the morning and just go and pluck vegetables behind your house and cook it in the kitchen.
The taste of the food prepared from ingredients fresh from the farm is beyond description. It exudes a freshness and taste that is sorely missing when I buy from my vegetable vendor in Pune. And the same food drizzled over with ghee and butter made from your own cows, takes the taste meter shooting up to the sky!

So for aloo parathas for breakfast, potatoes were dug out from the farm that very morning, for pathroru in the evening, a dish made with colocasia leaves, the leaves were cut in the afternoon, for karela fry or pumpkin curry for dinner, the respective vegetables were plucked in the early evening.
Winter is a difficult time for people. In Kharapathar, situated at a height of 8000 feet above sea level, there is 4 feet of snow everywhere in winter, thus making it impossible for people to move out of their homes. In the absence of a central heating system, people gather in the kitchen, around the hearth, for warmth and bond over steaming cups of tea and piping hot food.
Winter is also the time when leopards, foxes and bears come down from the forests to residential areas in search food. One evening, I sat and listened wide-eyed, as my friend’s grandpa narrated stories, Jim-Corbett style, of his encounters with leopards and bears. The animals usually come for cattle, fowl and dogs and also attack humans when the former are scarce. With his wrinkled face, weathered by the hard mountain life, the smoke from his cigarette forming curls around his face, he replied calmly, “What is there to be scared of wild animals?”, when I asked if he was scared of the leopards and bears.
Farm life in the mountains may seem romantic to a city bred girl like me who occasionally visits, but there is no denying it’s a hard life out there. In the absence of proper public transport, people are required to walk long hours. It’s better now, with some families owning cars, because in earlier days, walking to the next village, for 4-6 hours was no big deal.  And it’s not just walking straight down the roads. It’s walking either up or down on rough terrain, equivalent to a difficult trek. Taking care of the kitchen garden, tending to cows, the household chores, cutting grass for the cows, stocking up on dry wood for the winter, for the hearth and fireplace, everything involves physical stamina. But there is no substitute for clean air, fresh spring water from the melting glaciers, food from the rich soil in your own kitchen garden and splendid views from anywhere you look. And that is what makes life on a Himachali farm fantastic!