Hatching of Olive Ridley Turtles at Velas & How to Ensure an Almost Guaranteed Sighting.

Yes, as the title suggests, one may visit Velas but may not necessarily sight the turtles hatching. But before I give you a few suggestions on how to ensure that you are present when the turtles hatch, let me take you through the conservation programme at Velas.
For the uninitiated, Velas is a small sleepy village with around 350 houses, in Ratnagiri district, in Maharashtra. It may have passed off as one of the many non-descript villages along the Western coastline, but what has put this small village on the map is the Conservation project started by the Sahyadri Nisarga Mitra for the endangered Olive Ridley Turtles apart from other birds and animals in Sahyadri range too.
Around 13 years ago, a few villagers realized that baby turtles were being preyed upon by birds and dogs and turtle eggs were being taken by some other villagers and animals and birds too. So a few of them got together to observe mother Olive Ridley turtles laying eggs and studied their patterns and behavior.
The Olive Ridley turtles are an endangered species and it is believed that only 1 in a 1000 survive till adulthood. There are many reasons for this. Some of the reasons being the toxicity in the sea, threat by fishing nests, trawlers, being preyed upon by other sea creatures and birds, and mainly because these turtles have no defence or camouflaging system, since they cannot withdraw their flippers into their shell, like many other turtles.
The mother turtle returns to her natal beach, however far, at times swimming over 4800 kms to lay eggs. The female attains maturity at the age of 15 and may lay eggs upto thrice a year and some years none. The lifespan of the turtle is upto 150 years. The mother comes to nest on the beach usually after sunset. Once she finds a suitable spot for nesting, she uses her flippers to dig a pit around one and half feet in depth. The number of eggs vary from 100 to 150. They are tennis ball sized and white. The gestation period of the eggs is around 45 to 50 days, but this too depends on the temperature. The warmer it is the earlier the turtles hatch. The temperature of the sand during incubation also determines the sex of the turtles. Once the eggs are laid, the mother covers the pit with the sand that was displaced and smooths the surface without leaving any trace. She then returns to the sea never to return to tend it. This entire process takes around two and half hours.

You may like my post on the Secret Life of Shamans in Dzongu.
As part of the conservation project, a team of volunteers led by Virendra Patil and Sameer Mahadik, scout and patrol the 10 km long beach to check for nests each day throughout the year excepting the Monsoon months, from 3 to 7 am. They carry a long stick and poke the sand checking for nests. In a spot where the turtles have laid eggs, the stick would slide in effortlessly, because the sand would be loose owing to the turtle having dug out the sand and refilled the pit.  Another clue is the tracks left by the turtle’s flippers while crawling into the beach and back into the sea. Even the fishermen alert the volunteers about turtle sightings. Two days before we had arrived, a mother turtle had created a nest and Virendra and Sameer took us to show the nesting spot and the tracks left by the turtle.
Having found a nest, the volunteers collect the eggs in a basket and recreate the nest in a barricaded area. A pole is left outside the perimeter of the nest for easy identification. When there are many recreated nests, they are numbered too. From the 45th day onwards, the spot is checked everyday. If there is a depression in the spot it indicates that the turtles have hatched underneath the sand. This is because when the eggs crack, that space makes the sand cave in. A larger depression indicates more eggs have hatched. The baby turtles, eat the egg shells and whatever contents remain in the egg soon after hatching. That gives them the energy to crawl up their way through the sand , for one and a half feet to the surface. This takes them 3-4 days. By this time, the volunteers place a basket on the nest, so that when the turtles reach the surface, they are not attacked by birds since the barricade is open to the sky.
Every morning at 7 and evening at 6, the volunteers open the basket to check if there are any babies under it. Earlier I thought that the timings were to coincide with the tide. But I was told that since Velas is becoming a hotspot for Turtle sightings, the timings are decided to make it easier for the tourists.
Also the likelihood of the turtle sightings is higher in the morning than in the evening, as the cool sand during the night makes it easier for the babies to crawl up. There is no fixed number of the turtles that will hatch in any batch. It may vary from zero to 100.

It’s amazing to know that once on the surface the turtles orient themselves to the brightest horizon, which is the sea and dash off into the waters. It is for this reason that use of flash in photography is strictly prohibited while the turtles crawl into the sea, so as to not confuse them.
If there are turtles under the basket, the team places them in another basket and leaves them 50 meters away from the waves. The turtles have to learn to use their flippers (and strengthen them) to crawl that distance if they have to survive life in the sea.


It was an amazing sight to see the turtles crawl those 50 meters (no big deal for us, but a long way for the cookie sized babies). They seemed to hurry their steps as much as they could when they sensed the wet sand. And it was the cutest sight to see them use their flippers to clear the wet sand from their eyes. With the first wave, the turtles are swept into the sea, and the next wave brings them back, till a bigger wave takes them farther into the sea. We could see the turtles being tossed around with their heads and flippers popping out of the water, on the waves. 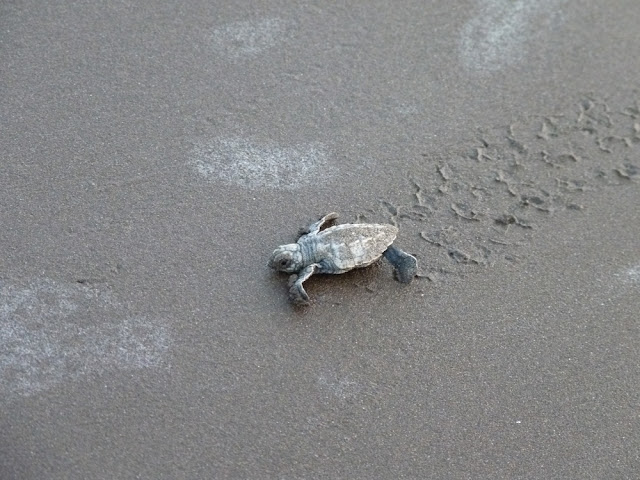 I felt a twinge of sadness as I bade farewell to the courageous babies who were off on their voyage into the mighty sea, a few hours after being born.


This nesting season, starting from November 2015 till date, 80 babies have been released into the sea. It was inspiring to see Virendra’s passion in this conservation work and he patiently answered all my queries.
Usually a Turtle Festival is declared in Velas on any weekend that falls close to the hatching time. A weekend, because more people would be able to visit and know about the conservation program. Now, the turtles don’t keep track of our weekend, do they? They would be busy, still incubating or crawling up the sand instead of showing up on the days of the festival. Many groups go on weekends and return without seeing the turtles. But here are a few tips that will ensure you have a sighting.

The first step is to call any of the home-stay owners and ask them the approximate time of the hatching.
They will give a probable period. Around that period, call them everyday to check if a depression has formed on the nest. Once the depression is seen, remember that the turtles take 3-4 days to come to the surface. Keep your bags packed and ready to leave any day during the probable period.
The Turtle festival was declared on the 20th and 21st of February this year, so I started calling my home-stay people from the 18th to check on the status (I first calls were made in the last week of January). Till 21st evening the turtles hadn’t hatched, but I was told the depression was seen since the 19th. So I packed by bags on 22nd morning and landed in Velas in the afternoon. That evening there were no turtles but Virendra said that the depression is big enough to guarantee a sighting the next day. And just as he said, we saw 3 babies on 23rd morning and then another one on 24th morning.
Another most important tip is that avoid the weekends. From the time I had heard about the Velas festival through Nomadic Thunker’s blog, I was sure I wouldn't go on a weekend. Weekends see as many as 600-700 people thronging and jostling to get a glimpse of the tiny turtles. Jitendra said with dismay, that some visitors are just revellers who come as tourists and do not take an interest in turtles. After the turtles are left into the water, visitors are instructed not to enter the water for upto ten minutes, so as to not crush or stamp on the turtles who wouldn't have gotten very far by then. But people don’t listen, and jump into the water and even hoot and make noise as the turtles crawl towards the sea.
I was thankful to have avoided the weekends, because the 3 days we were there, we were a total of 6 people with the entire beach to ourselves. So, we could see the babies from up close and also interact with Virendra Patil and Sameer to know more about the conservation efforts.
The next probable period of hatching is in the first week of March. So if you plan to go, you know what to do now..:-)
I stayed at Amol Soman’s home-stay. I would be writing a separate post on that. But here’s his number if anyone is interested in planning soon- 02350-220279. The Sahyadri Nisarga Mitra’s website lists a few more numbers of home-stay owners.
If you visit, do let me know how your experience was :-)