I grew up on a staple diet of Enid Blyton’s books, where the children roam free and play in the countryside, go on picnics and eat crunchy apples (that inspired me to go for apple harvesting), bars of chocolates, and sandwiches and pluck basketfuls of wild berries in the forest. :-)
Little did I know that that fantasy would become reality many years later. I mean the berry picking part of it. And that too strawberry picking! I have an intense love affair with strawberries. There was a time, not long ago, when everything I used, the lip balm, shampoo, face cream, perfume, body spray, body lotion, body wash, had to smell of strawberries. This obsession with strawberries backfired with my husband putting that fragrance in the black list! So when The Western Routes announced their trip to Panchgani for strawberry picking, that was the culmination of my obsession with strawberries.
We started from Pune at around 6.30 in the morning and after a brief halt for breakfast enroute, reached Panchgani at around 10.30 am. We arrived at Sunil Bhilare’s strawberry farm which is spread around 3 acres. Sunil had started cultivation of strawberries around 20 years ago. The British had started strawberry cultivation in Mahabaleshwar and Panchgani, due to the climate and soil being very conducive to the crop.  Sunil said that it’s been almost over 80 years since strawberries were introduced in the region and it accounts for almost 85% of the fruit produced in India.
He gave us a few instructions on how to pluck strawberries. That we must pluck only ripe fruits and not trample on the saplings. Off we headed for picking, armed with a small cardboard box to collect strawberries in, instead of a basket which would have fit right into my fantasy. 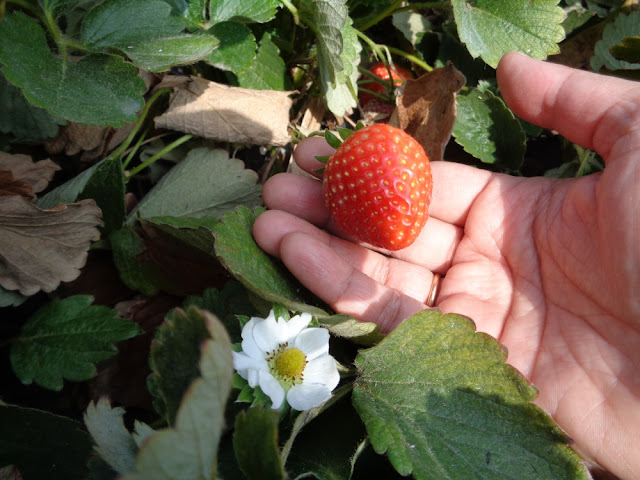 The plants were more like saplings, very short and on the ground and were planted in rows. In another area of the farm, Sunil has tried vertical farming, by placing 3 pots on top of each other with some gap between them. This saves on space and also optimizes the use of water since the water dripping from the top most pot drips on to the ones below, and finally on the ground levels, where he has planted broccoli which get watered on its own. That was a brilliant idea, I thought.
We tread carefully between rows of plants, on the lookout for red berries peeping out from behind green leaves. In some cases the ripe berries lay concealed under leaves, so we had to gently move the leaves to check for berries. I plucked some berries, stopped to admire the surroundings, put some freshly plucked fruit into my mouth, contemplating about various things and again resumed plucking till my box was almost full. The flowers of the strawberries are white and doesn’t have the fragrance of strawberries.
Bhilare has many varieties of strawberries on his farm like the Winter Dawn, which is what we picked and Nabilla and Camarosa and Sweet Charlie, which are sourced from different places like California and Italy.
I chatted up with Bhilare about strawberries and he said bees are the main pollinators for the fruit and that the season is between October and April. They import the mother sapling from countries like Italy and the US and from the mother plant, they get around 10 rootstocks which is planted in the farms. Each plant yields approximately 700 grams of the berry. It takes around 21 days for the flower to turn into a ripe, red berry. In the peak season, the Bhilare farm sends around 200 kgs of the berry to different places like Bangalore and Hyderabad each day.
Having plucked and gotten to know the fruit better, it was time to indulge in strawberries dipped in chocolate and condensed milk and some strawberry cream. At the farm, the strawberries were priced at Rs 120 a kg, and in Pune it is being sold at Rs 320 a kg. That’s because, it’s a very fragile and perishable product and great care has to be taken while transporting it.
After having enjoyed ourselves at the Bhilare farm, we headed out to the Mahabaleshwar market, where I shopped a few things unique to the place and then we had some lip smacking lunch at Bagicha. We also stopped at Menawali at the 16th century Peshwa minister, Nana Phanavis’ home. But the details of that would be in another post. For this is a post dedicated to strawberries and my love for it!
The Western Routes conducts the strawberry picking tours every year during the season and it’s always fun with Jayesh, the founder, whose passion for travel and food is contagious. If this post has got you interested, do go there next year.

And what did I do with the one kg of strawberries I had picked. Well, it wouldn’t hurt to share my culinary experiments on this travel blog! It was two weeks full of strawberries. Strawberry smoothie, strawberry parfaits, two jars of strawberry jam and a baked yogurt tart with some jam topping. I'm having withdrawal symptoms already!!

A Visit to a Jaggery Making Unit.

I use a lot of jaggery in my cooking. We use it as a sugar substitute wherever possible, use it in sweets in place of sugar and even eat it with jowar bhakri (flat bread made of sorghum flour). But I did not know how the jaggery that I eat every day is made or comes from, until yesterday.

We had been to a village called Phulgaon, near Pune, and as we were exiting the village, we spotted a small jaggery making unit. I had luckily carried my camera and could take pictures and also enquire with the person there about the whole process of making jaggery.

Jaggery making workshops are usually located next to sugarcane fields. The sugarcane is washed and put into a motorized crusher, and the juice is collected in a cauldron through a strainer to remove floating impurities.

In earlier days, crushers were driven by oxen. The juice is pumped into a giant cauldron with a capacity of 1000 litres.

A man with a long slotted ladle keeps stirring the juice for about 2 and half hours till the juice evaporates and becomes 1/3 of its original volume. He also keeps removing the scum and other impurities that gathers on top while the liquid is boiling. Some lime is also added to the liquid to separate impurities which gather and float on the top, which is removed.
The fibrous matter that remains after crushing the sugarcane (called bagasse) is used to fuel the furnace used for boiling the juice.
Once the juice evaporates and has thickened satisfactorily, it is poured into shallow vats where it is allowed to cool and solidify. After it solidifies into a soft substance, it is pressed into desired molds into various shapes and sizes.

Posted by Priya Krishnan Das at 00:58 No comments: