I had been following the INTACH Delhi FB page for some time, so when we visited Delhi in March this year, I got the opportunity to attend one of their Heritage walks. They conduct walks every weekend and the weekend that we were there, the Lodhi garden walk was scheduled.
During our two and a half years stay in Gurgaon, which is 30 kms from Delhi, we had visited the Lodhi gardens many times and of course seen monuments there, without knowing their significance. This walk totally changed our perspective on what we had seen multiple times but knew little about.

The Lodhi garden is spread over 90 acres of undulating lawns, jogging and cycling tracks and lined with beautiful trees and flowering shrubs and plants. But its name derives from the fact that it is home to some of well-known tombs from the Sayyid and more importantly, the Lodhi era, dating back to the 15th century.

Before the Lodhi era was the Sayyid’s era when the Sayyid dynasty ruled the area which was then known as Khairpur village. The Lodhis then ruled over the Punjab region. The Sayyid empire was unstable with a lot of internal conflict. They called the Lodhis to intervene and resolve the issue promising them rewards of land and money, which didn’t come through once the work got done. So the Lodhis decided to take over the Sayyids’ empire as a mark of retaliation and retribution.
The area around the tombs was converted into a landscaped garden in 1936 and was named Lady Willingdon Park, after the wife of the then British Viceroy. It was named Lodhi Garden post-Independence and was re-designed in 1968 by eminent architect, J.A Stein.

Although the garden is primarily dedicated to tombs from the Lodhi dynasty, there is one tomb belonging to Muhammed Shah Sayyid of the Sayyid dynasty. After his death in 1451 AD, the tomb was built by his son, Alauddin Alam Shah. This structure like the other tombs in the garden were made of Delhi quartzite, procured locally. It is a very hard stone, so very minimal chiselling work has been done on that. The quartzite is interspersed with red sand stone on which one finds the more intricate carving and designs. 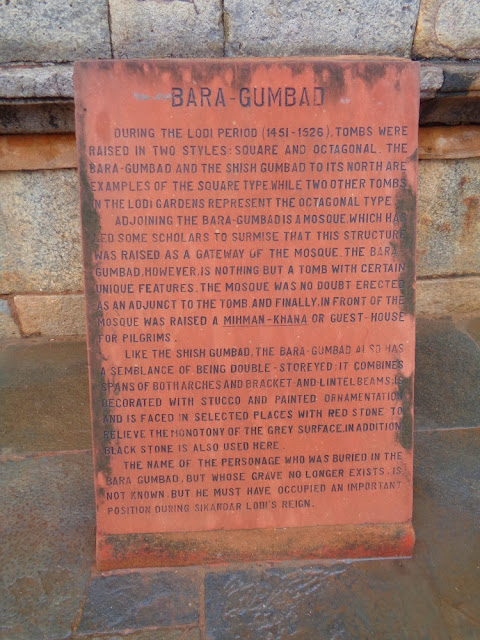 Jaya Basera, who conducted the walk, pointed to some interesting aspects of architecture. The Sayyids wanted to send a message to the Hindus, that they have come to India for good and do not intend to leave like the Ghazni and Ghori, who repeatedly plundered India and stole many tons of gold, precious stones and metals. So, although Islam prohibits the representation of any life forms in sculptures and structures, they modified it subtly, to render them as an abstract representation of life forms which the Indians identified with.

The only Sayyid era structure in Lodhi gardens and is the tomb of Muhammed Shah Sayyid. The central main chamber is octagonal with the cenotaph of Muhammed Shah in the middle and surrounded by several other graves. It was customary for a person of importance to be buried in the center of the structure. Also, the difference between the graves for men and women are known by the raised middle vertical portion of the grave for men, also known as kalam. In Islam, it was tradition to bury the body with the head facing towards Mecca, which from India would be to the West. The dome above was made of intricately done stucco work and painted. There are also bands of inscription from the Quran. The structure is circular as opposed to the square structures built by the Lodhis. The central octagonal chamber has in its center the cenotaph of Muhammed Shah surrounded by several other graves. The main entrance to the chamber is from the south. Small chhatris (umbrellas) surround the main dome which lend the building an Indo-Islamic look. The dome is crowned with an inverted lotus shaped structure. The ceiling inside is decorated with carved stucco and has the cosmic star in the centre which is believed to connect the dead to heaven and has several Islamic inscriptions and decorative motifs.
Next we saw the Bada Gumbad, which means a building with a big (bada) dome (gumbad). It’s the first Lodhi era monument dating back to mid-15th century. It’s a square structure and appears to have 2 stories from the outside. However, when one enters one sees a single chamber with a magnificent high ceiling. The absence of a cenotaph in the building, stylistic differences lend mystery to the purpose of the structure. Some believe that it served as gateway into Khairpur village in the 15th century. Adjacent to the Bada Gumbad is a mosque with a pavilion to the east. It has five arched openings with intricate stucco work of floral and geometric motifs. There is a prayer hall with inscriptions from the Quran on the walls and ceilings.
Next to the Bada Gumbad is the Sheesh Gumbad, which means a dome (gumbad) covered with glass/mirrors (sheesh). This is because the dome and parts of the façade were completely covered with coloured glazed tiles which were imported from Persia. But today, with just a few cobalt blue tiles on the façade, one can only imagine the beauty that this building must have been, back then. This structure is again square like all Lodhi era structures and the inner chamber with the cenotaph are decorated with fine stucco work of floral patterns and Quranic inscriptions. There are several graves in the central chamber, possibly of eminent people during Sikander Lodhi’s time.

Further ahead is the tomb of Sikander Lodhi. It’s a walled tomb which makes it look like a fortress of sorts, and is said to be the last prominent Lodhi era monument constructed in Delhi. This tomb is said to be inspired by the tomb of Muhammed Shah, since it is quite similar in appearance excepting the chhatris on top. The inner chamber of the tomb is surrounded by a verandah of arches with carved sandstone brackets. In the chamber inside, there are glazed tile decorations, painted stucco work and a single grave of Sikander Lodhi.
Our walk ended with the explanation of a fascinating structure- a 16th century eight-pier bridge, east of Sikander Lodhi’s tomb. It was built during Akbar’s reign, to span a tributary of the Yamuna river that probably met the Barahpula nullah further south. This was a part of the river system that drained the south Delhi area and then fed the Yamuna. It’s now called ‘Athpula’, (‘ath’ meaning eight and ‘pul’ meaning bridge) due to the eight piers that support the bridge.

At the end of the walk, I asked Jaya as to why monuments in Delhi meant only Islamic monuments (Qutab Minar, Humayun’s tomb, Lodhi Garden tombs, etc), and where the Hindu monuments were, because the Islamic invaders came to India in the 9th century. She said that all Hindu monuments were destroyed and razed to the ground by the Islamic invaders, so there is nothing left. She even mentioned that they not only destroyed the Hindu temples, but also transferred entire blocks of stone and pillars to construct their own mosques, in place of the temples. In some structures like the Qutab Minar, one can see stone bricks and columns with Sanskrit inscriptions still intact. The horrors of the Islamic invasion are well known to everyone, but to hear first-hand from a historian about the same and to know that, no single ancient Hindu temple survives in the whole of Delhi, made me sad.
But I couldn’t remain sad for long. I had many things to do in Delhi before I left for Pune, but more of that in the next post. :-)
Though it was March, we had had a sudden heavy downpour in the morning. Unarmed with umbrellas, we still decided to make the best of the walk, and it was indeed a very informative walk. I would surely like to attend more walks with them.
You may follow INTACH Delhi on their Facebook page. The fees for the walk was Rs 250.

Posted by Priya Krishnan Das at 05:06 No comments: