I had been postponing going for trekking for no particular reason, ever since coming to Pune. Then last Saturday morning, I thought to myself, "It's either now or never". I browsed through the Pune Hikers calender and zeroed in on 2 treks, one to the Torna Fort also called Prachandagad and the other to Sudhagad. I called up both the organizers and was told both treks are graded 'easy'. That was important because my muscles must have got atrophied due to lack of serious treks and trails in the last 7 years. I confirmed my presence with both organizers and luckily that day being Eid, it was a bank holiday so I was told I could make the payment in person. I woke up at 4 a.m the next morning with only around 4 hours of sleep after a late night dinner. I sat for the first 5 minutes swinging between trekking and sleeping more. Luckily I chose the former. The next dilemma at 4.05 in the morning was to choose between Torna and Sudhagad. I sat and browsed for 10 minutes reading up more about both and realized that no other trekking group had listed Sudhagad. So it was Sudhagad, I got ready and left home at 5.30 a.m.

Sudhagad is located in Raigad district, and as we descended the ghats and approached Thakurwadi which is the base village for the trek, I could sense the air getting heavier with moisture, as Raigad is closer to the coastline. Shivaji Maharaj, the warrior king of Maharashtra and my childhood hero is said to have made Sudhagad as one of his main bases. It also happens to be a replica of the Raigad fort which was Shivaji's headquaters.

We reached Thakurvadi, a small village with a few houses scattered and malnourished men, women and children around. After a short brief, we started our climb at 10.30 am. The trek passes through amazing landscapes, dense foliage, giant trees, gnarled roots, twisted creepers, chirping birds and above all, right at the top, at 2030 feet above sea level, you get to swallow clouds..:-) We started trekking at 10.30 a.m and wound up by 6.45 p.m with a half hour lunch break. That's around 7.5 hours of continuous walking on rough terrain. Luckily I've been jogging since a few months and didn't find the trek difficult. Of course, once I sat in the bus, drenched to the bones (I had not carried a change of clothing and it had rained heavily on and off), my legs throbbed with pain due to the cold!!


The photo below was taken on a rusty and rickety ladder and short bridge connecting two cliffs of sorts, with the ground many meters below. The bridge was shaking as we walked on it, it was drizzling but so as to not give this excellent shot a pass,  I slowly pulled out the camera with my shaky hands and clicked this..:-) 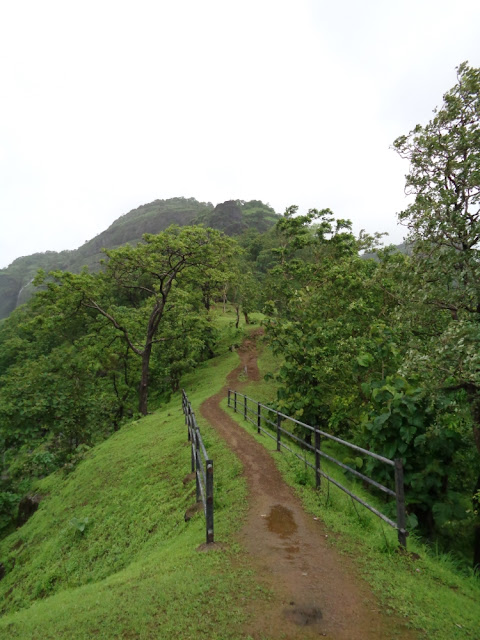 The various shades of green was so refreshing....


Once we reached the top, I noticed these white lines criss-crossing everywhere. On looking closer I noticed that these white lines were translucent and were sandwiched between the black rocks. At many points they intersected  and formed triangles like the picture below. The triangle appeared like a vortex into another realm to my hyperactive imagination..:-) I decided to stand in the centre of each triangle hoping for something extra ordinary! Well nothing remarkable happened but I was anyways immensely happy walking in the clouds. The first few triangles I stood on, I released a fervent wish into ether. For the subsequent triangles, I just decided to focus on my inner silence and be in sync with whatever I was experiencing- sheer beauty and happiness..:-) 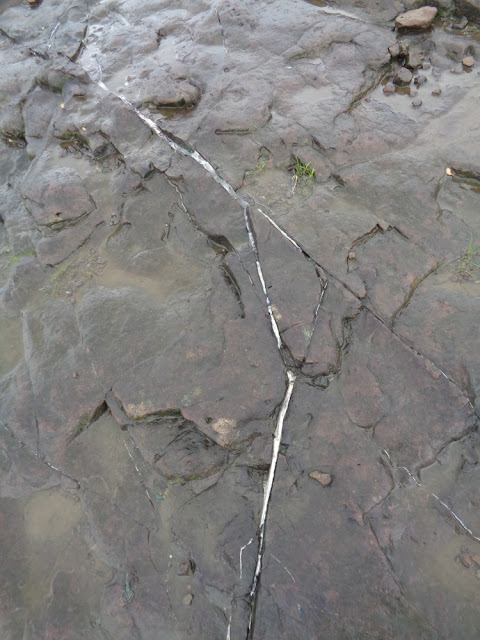 Just as there were these translucent crystalline lines, there were also while clumps of crystal scattered everywhere..:-) 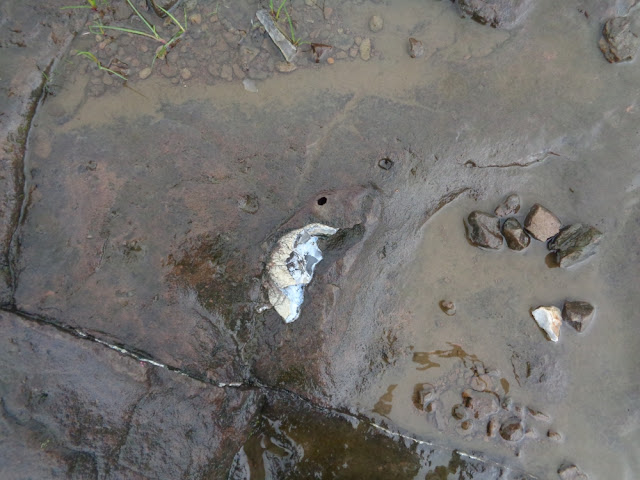 A 'wada' or housing colony from Shivaji's era. The current owner of this house is a priest in a nearby anciant Shiva temple and offers food to trekkers and travellers. 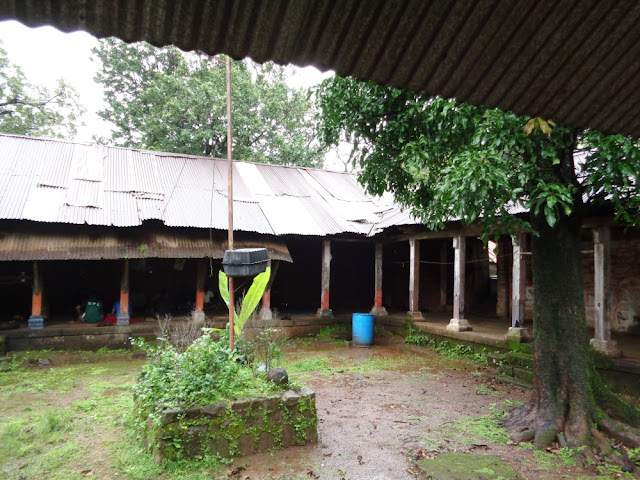 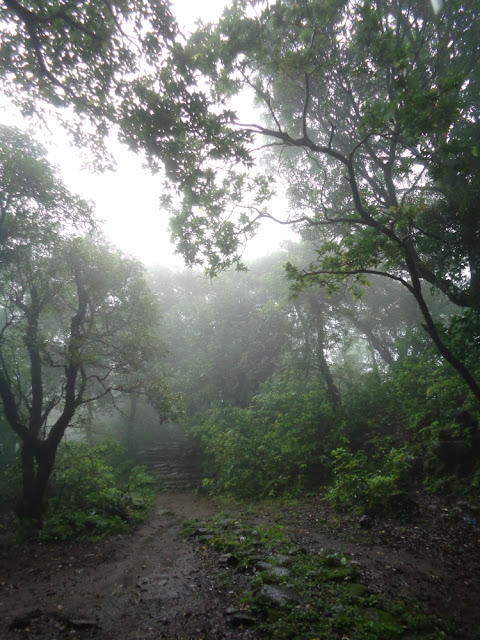 Our eyes can never tire of such beauty... 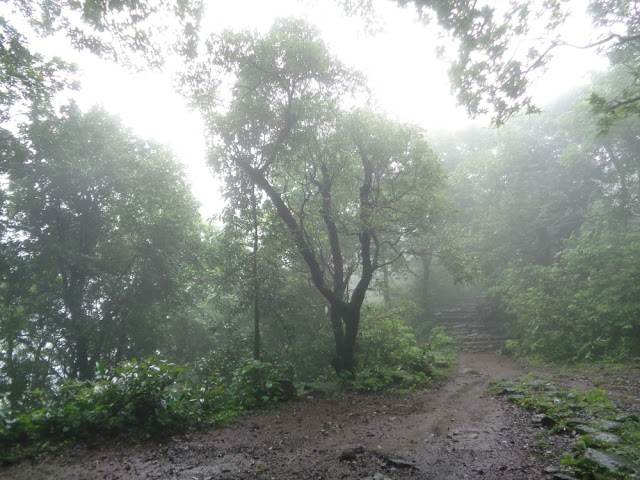 The 'nandi' outside the Shiva temple.. 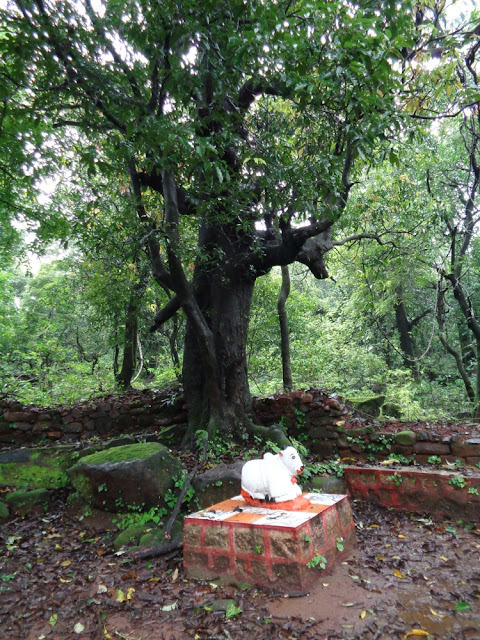 all the rocks, stones and pebbles were covered with bright green moss..:-) 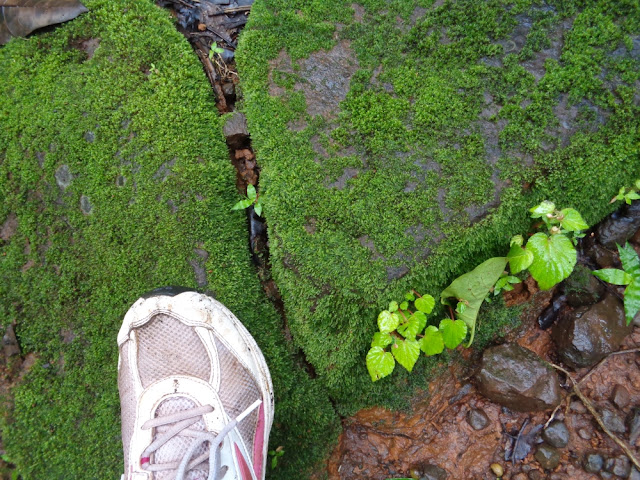 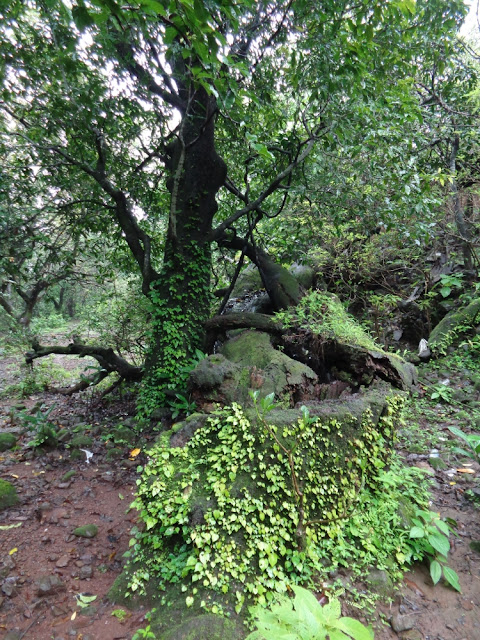 A water reservoir which used to provide drinking water to the troops and residents of the fort.. 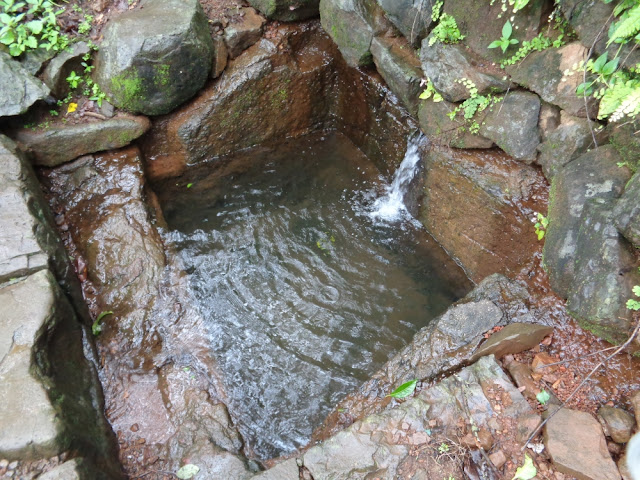 walking alongside the rampart of the fort.. 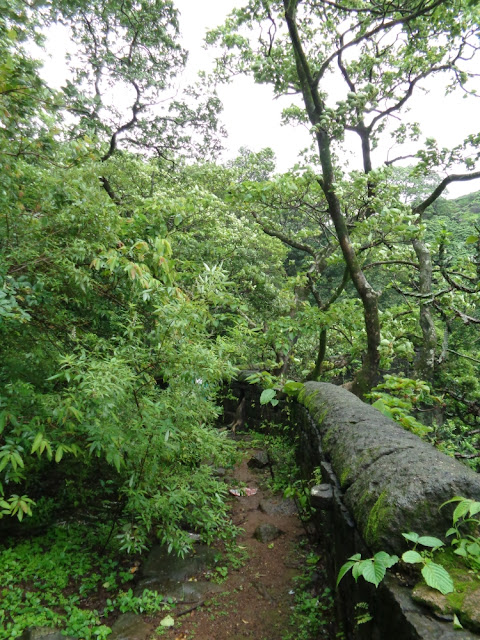 The secret escape route which piqued my interest..:-) The steps were very steep, slippery leading to a short dark tunnel... 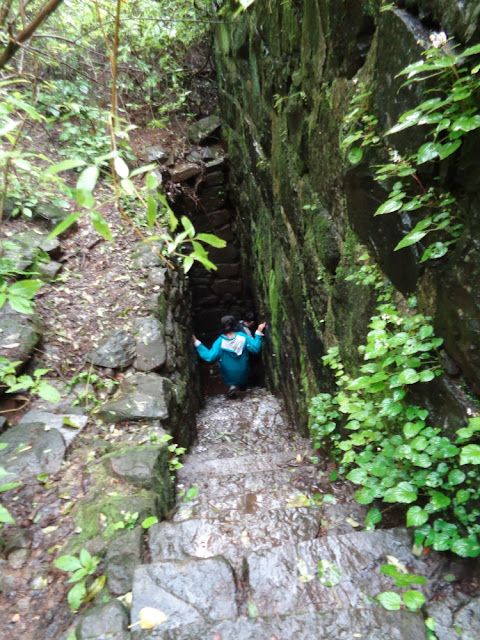 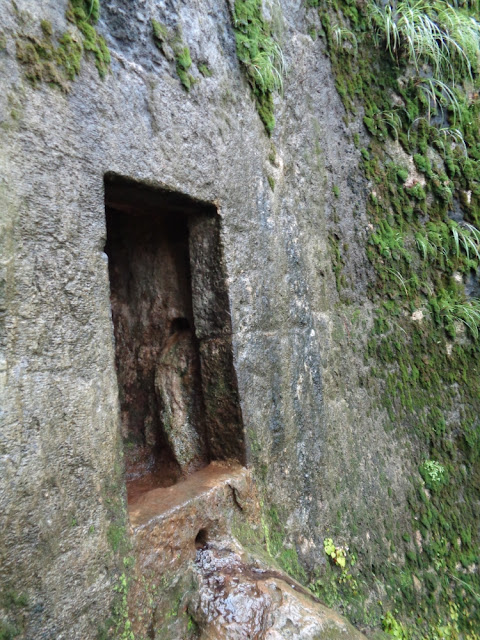 We walked for long in the clouds. Words cannot to justice to that experience..:-) It also rained heavily for some time and the rains at the top with the strong wind literally and figuratively blew me away..:-) 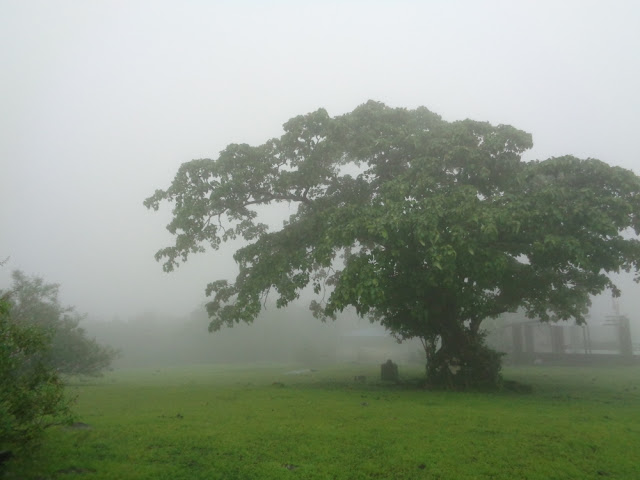 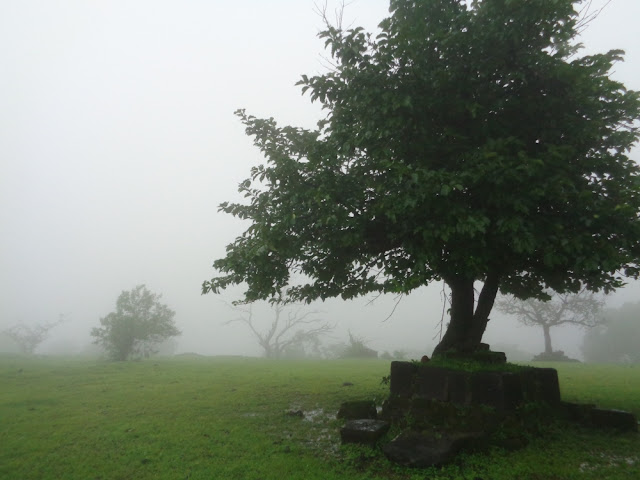 In the picture below are tombstones for the soldiers. 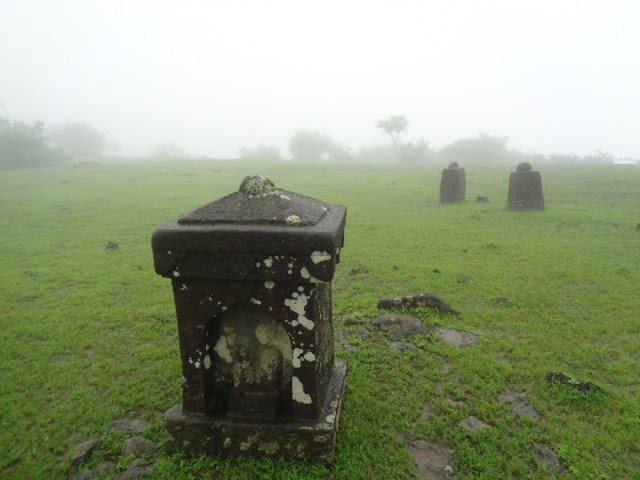 This 3.5 yr old kid was the star attraction in the group. He is only 3.5 yrs old and has already completed 6 treks. He was accompanied by his father. He walked all the way up and down and his father only carried him where the steps were steep or when there was too much water anywhere. He kept us entertained with his innocent and curious questions. 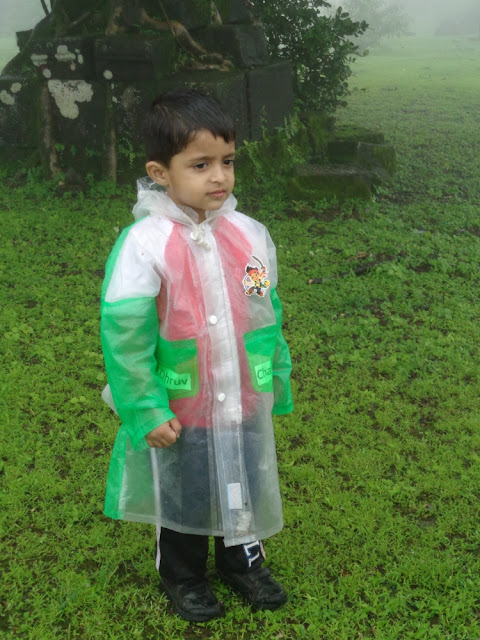 This is the main entrance to the fort, viewed from top. Like all other entrances of Shivaji's forts, this one too is concealed and not entirely visible from the front, unless you go closer. It was constructed so as to make it difficult for enemies to get to the fort and buy the soldiers more time to prepare. 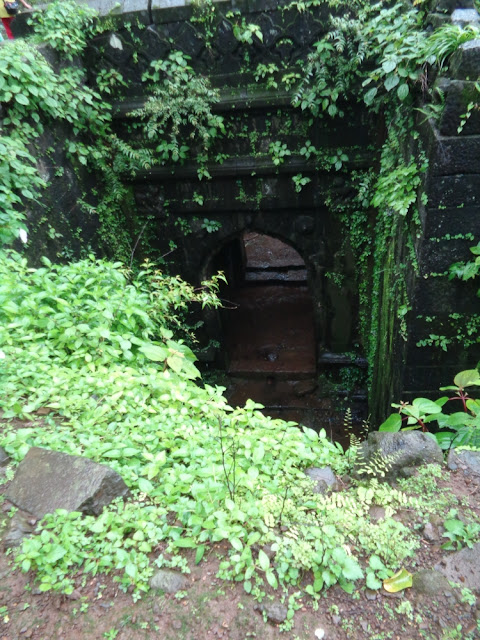 The main gate up close... 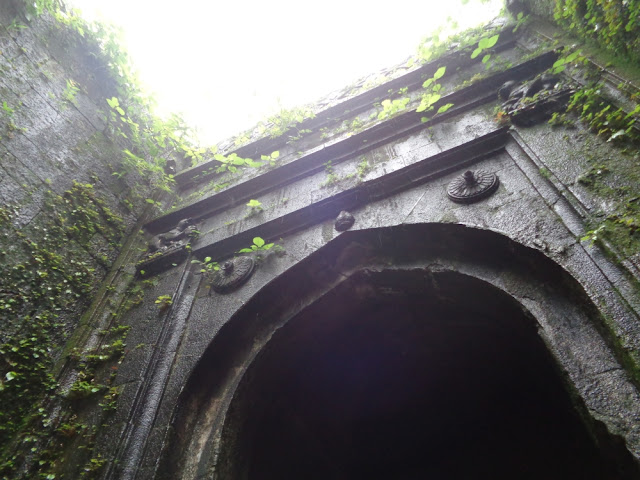 On the corners of the entrance is the carving of this mythical animal crushing 2 elephants under it's feet. It symbolized that no matter how strong the enemy was, Shivaji's troops were ready to crush and defeat them. 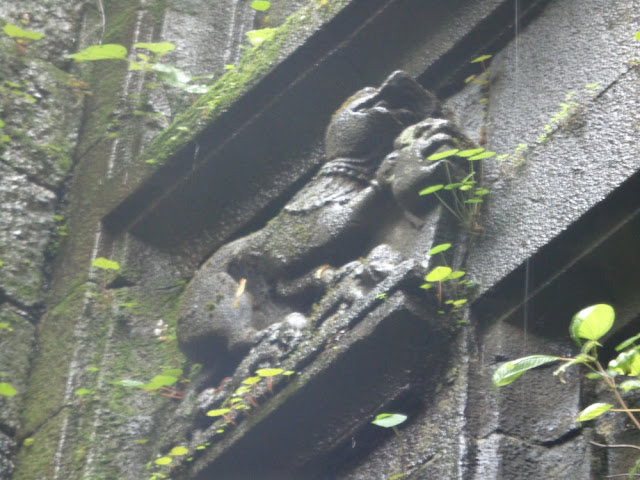 This is called the Takmak- Tok, a cliff from where prisoners were pushed to death. I wondered why they chose such a beautiful place to mete out such a harsh punishment. But anyways, the view was lovely and we could see clouds rising from below and engulfing us. 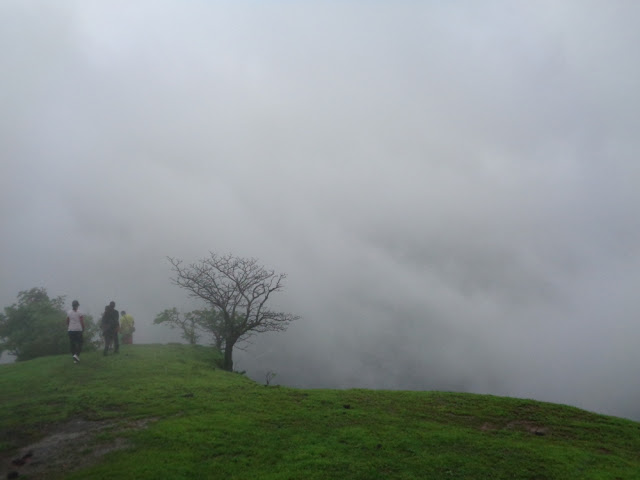 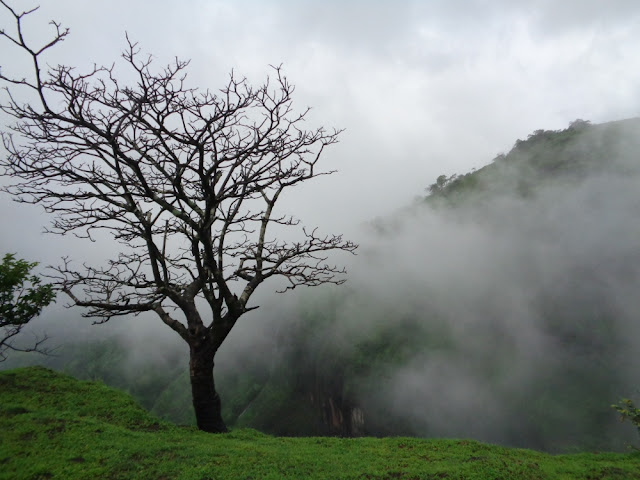 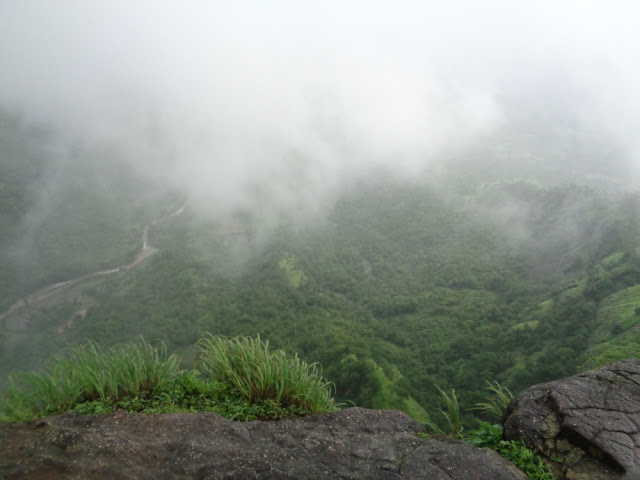 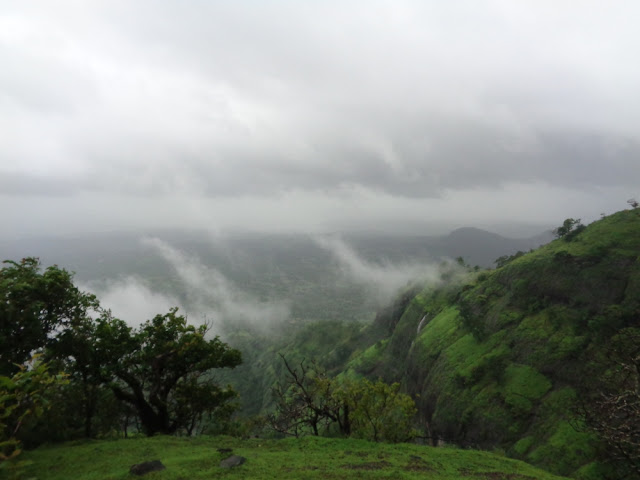 I saw this cute little calf on the way back and one of the other members in the group who has a farm in Chennai said the calf is just 2 days old. I wanted to go and hug the calf but decided against it because it's mother was nearby..! 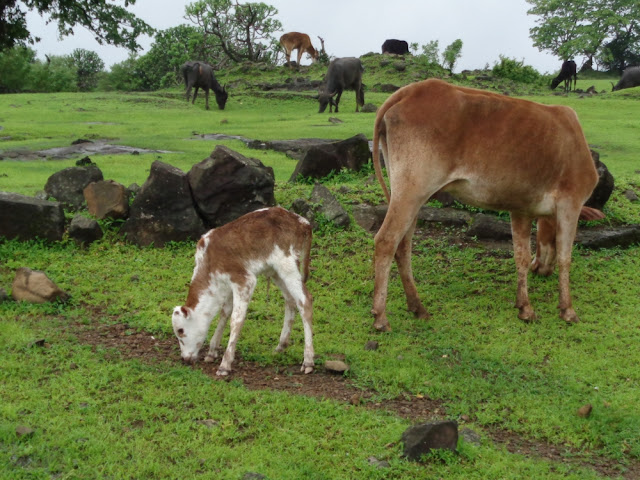