Visit to a 115 year old Kulfi shop in Old Delhi.

The first time I had heard about Kuremal kulfi was when reading recommendations by celebrity chefs on eat outs in Delhi. And we were anyways going to the city in two weeks, so I had bookmarked this place. The address said it’s in Chandni chowk, which I knew is a crowded area with narrow lanes, entangled wires dangling and cycle rickshaws and two wheelers almost dashing past you, while you cling to the sides of the lanes, if your reflexes are good.

Zomato informed us that there are two Kuremal Kulfi shops in the same lane. One is Kuremal Mohanlal and the other is Kuremal Mahavir Prasad. Both had great reviews, but the latter had fewer ones indicating that it is a newer establishment. The timings given on Zomato are wrong too, which we discovered only after reaching there. But that worked in our favour. So, on a Friday morning, we took the metro from INA to Chawri bazaar in search of the famed Kulfi. 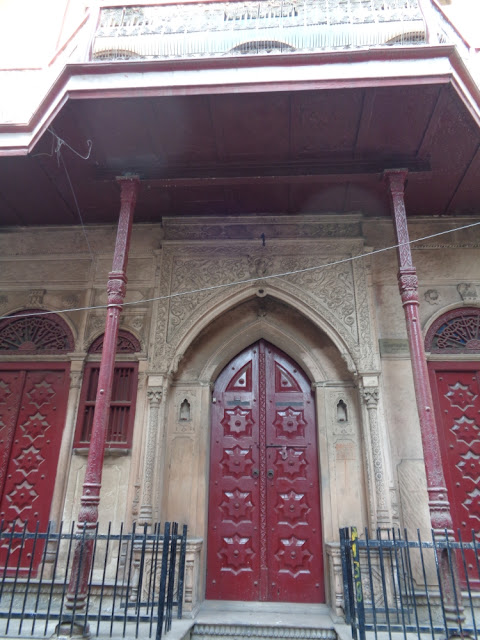 We navigated through narrow, crowded lanes, with wires and cables entwined and hanging across buildings like festoons in disarray. I was surprised to see some old mansions or havelis with spectacular architecture, happily co-existing with modern squalor. 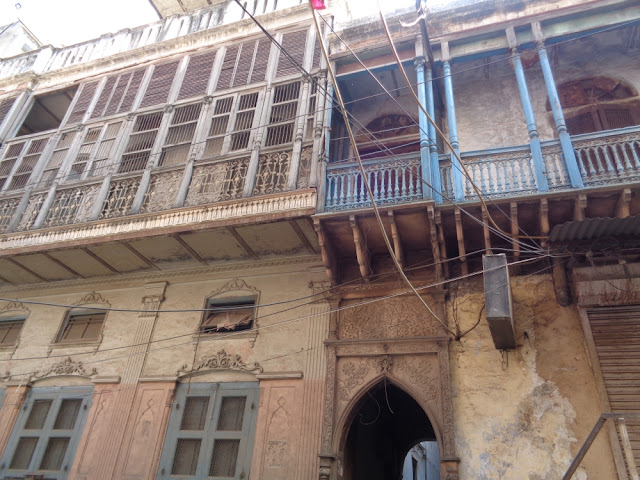 We reached Kucha Patiram marg, only to find both the shops closed. I was almost crest fallen for a few moments. I walked up to the opposite shop and asked the owner as when the shops would open. He said both shops open at 1 pm and it was only 10.30 am. But before my hopes dashed further, he said that just around the bend of the lane, they have their kitchen (karkhaana) where they make the kulfi and we could go there. He offered to accompany us and led the way to the kitchen.
My husband couldn't believe that I could go to any lengths (read walking through dusty, dirty streets) to eat a Kulfi.


But again, this is not just any kulfi. Kuremal is a legend in its own right. It was started in 1901 by a person called Kuremal in the very karkhaana that we were going to.

We were happy that we got to meet the owner, Mohanlal, the founder Kuremal’s first son, and owner of the Mohanlal shop. He was sitting with his son in a 10 x 10 square feet area, half of which was partitioned to accommodate giant stoves and cauldrons. There was nothing cooking in the kitchen when we visited, but Mohanlalji said that they have 2-3 others areas nearby and each part of the kulfi making process happens in a different space.
As opposed to the timings mentioned in Zomato, which said the shop opens at 9 am, Mohanlalji said it opens at 1 pm, but at the karkhaana, you can come even early morning or late night and have your fill of kulfi. When Kuremal had started the shop, there were just 2 or 3 flavours like malai, kesar and mango, but now they have experimented with flavours successfully and have as many as 25 flavours, some unusual like imli (tamarind), paan (betel leaves), and fruit sorbets like jamun, sitaphal, pomegranate, etc. One interesting innovation is the stuffed mango kulfi, where they scoop out the insides of the mango, fill the cavity with mango kulfi and freeze it.
They didn’t have a menu card in their karkhaana, so we asked them what flavours are available. We decided to start with the paan kulfi, as I had never tasted that before. Mohanlalji sent a boy on an errand to pick up some paan kulfi from the place where it was stored. While waiting, I chatted up with him casually. I remarked on the fine woodwork on the opposite haveli. He said that it was built in 1930’s and the owners used to live there until a few years ago and now they have leased it out for some factory work.

The paan kulfi arrived. It was delicious to say the least, with crushed betel leaves in the kulfi enhancing the flavor. Next was the mango kulfi. I was a bit disappointed with this because it wasn’t as creamy and the flavor appeared a bit synthetic. While we were deciding what to eat next, Mohanlalji suggested that we try the jamun sorbet as that is a speciality. We asked him what else was there and while he rattled off the list of flavours, we asked for sitaphal kulfi too. He sent one attendant to get the jamun sorbet and sitaphal kulfi. The jamun sorbet was out of the world with some chat masala sprinkled on it. We gulped that down and targeted the sitaphal kulfi. This one was more like a sorbet than a kulfi, not creamy at all. We were eager for more. What we had tasted so far were contemporary flavours, so we asked for one of the original flavours which Kuremal had begun with. So Mohanlalji suggested we try kesar. So we did and found it awesome.
I asked him whom the Kuremal Mahavir shop belongs to. He said that’s his younger brother’s. Sensing that I would be touching a raw nerve here, I did not ask any more questions regarding what appeared to be a fallout between the two. I asked him and his son about the quantity of kulfi they make each day. They replied vaguely saying that it depends on the orders they get and did not divulge the details of the quantity they make for the shop. Respecting that I did not push further. They accept orders for weddings, parties and other functions, within Delhi and even anywhere in the world. If it’s outside Delhi, their cooks travel to the location and prepare the kulfis there.
Mohanlalji has a very smiling face and was very friendly but seemed reluctant to talk about his business. We thanked him for the kulfis and proceeded to explore another part of Delhi, with a happy stomach.
Each plate of kulfi/sorbet costs Rs 60. I may not go back for kulfis there, but if you want to visit a kulfi shop with a history of 115 yrs and situated in an area studded with old havelis with the old era charm, then it warrants a visit.

Posted by Priya Krishnan Das at 08:13