Bhimashankar Forest Trail: In Search of the Giant Squirrel.

One of the benefits of living in Pune is its proximity to forest reserves within driving distance. The forests enchant me like no other place. The sunlight streaming in through multiple shades of green, the twisted, gnarled roots and branches, flowers in a thousand hues, a perpetual orchestra by the birds, and so many interesting creatures that reside there, the forests make me feel at home.

We decided to make a one day trip to the Bhimashankar Forest Reserve, which is located at around 3100 feet above sea level, in the Sahyadris, in Pune district. We went with The Western Routes, and such a fulfilling trip it was. Even according to Jayesh, the founder of TWR, it was the most amazing trip. For the first time, he said, in all these years and times he has visited, he as well our group were fortunate to see all the main species of beautiful creatures that inhabit the Bhimashankar forest, namely, the Malabar Giant Squirrel, the Bamboo Pit Viper, Blue Mormon butterflies, The Atlas Moth,  the Hawk Moth and the Moon Moth, all in a day!

We were doubly lucky as we also got to enter the 13th century Bhimashankar temple which houses one of the sacred 12 Jyotirlingas. I had read on tripadvisor.com that on weekends, one has to wait in queue for almost four to five hours to enter the temple. 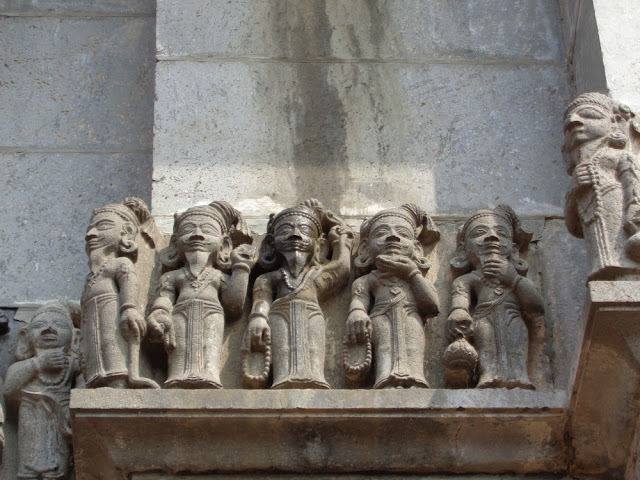 And we were going on a Sunday. I'm not an avid temple goer as such but have a fascination for ancient ones. The forest reserve is beyond the temple and when we were passing by, we noticed there was no queue at all. So we quickly went and paid our obeisance at the sanctum sanctorum. The entire temple is made of stone, although it’s not a monolith. The interiors are also made of stone with simple yet beautiful carvings of deities and temple motifs. Photography wasn't permitted inside, so there are no photos of the interiors.

The main temple and sanctum sanctorum is believed to have been built in the 13th century in the Nagara style of architecture, and the structure above the sanctorum and other extensions were built by the Peshwa minister Nana Phadnavis in the 18th century.

Outside the temple, we saw many vendors selling roots and herbs collected from the forest. For many villagers who live on the fringes on this forest, selling these herbs and roots is their livelihood.

There were also various stalls selling flowers, sweets and items for offering the deity.


Mighty pleased with our luck, we had a spring in our walk as we proceeded to the forest. A few steps beyond the temple, is the origin of the Bhimashankar river, which flows through Karnataka and Telangana before entering the Krishna River. The area around the origin of the river was strewn with garbage. After wading through this eye sore, we were in for a visual feast inside the forest.
Even before entering the forest area, Blue Mormon butterflies flitted past us gracefully as an indication of more beauty that awaited us inside. The Blue Mormon is commonly found in the Western Ghats and is also the state butterfly of Maharashtra. As is my wont, upon entering a forest, I did a mental jig and a hi-five with the forest fairies. And lo behold! When I took my first picture to capture the green trail, I was thrilled when I saw these two blue blobs of light. They look so beautiful! This was a good sign, I thought to myself!
The entire trail passes through lush greenery, a million shades of emeralds, jades and green dipped in sunlight. We were accompanied most of the time by the sound of the gurgling water from the river and its streams that criss-crossed the forest.

You may like my post on bird watching in Sarmoli.
Right from the beginning we were on the lookout for the Giant Squirrel, for that was the main reason why we had come.
We saw huge nests of the Squirrel but not the creature itself! Jayesh had told us to watch for sounds resembling the shooting of pellets, for that is the sound they make when threatened. We decided to keep walking and watching out. When we had crossed a stream and walked ahead, Shweta, one of the members of TWR informed us that she had spotted a Bamboo Pit Viper  just near the stream and it was slumbering.
We were far ahead but like excited children who had been promised boxes of Ferroro Rocher, we gleefully retraced our steps, keeping our fingers crossed that the snake would still be in snooze mode. Luckily it was! It was a juvenile snake but so beautiful with its leaf green scales and yellow underside. Like paparazzi, a few members of our group shot away with their fancy lens at the napping snake, which was quite oblivious to its new celebrity status. But five minutes into the photo-shoot, it opened its eyes wondering about the ‘funny humans’ who had disturbed its siesta!!
A few more yards ahead, there was sudden hushed excitement. We had spotted the Giant Squirrel. Now, the Giant Squirrel is a herbivorous, large squirrel found on the Westen Ghats in India. It is called ‘shekru’ in Marathi and is the state animal of Maharashtra. It is arboreal, which means that unlike some animals which may occasionally climb trees, these squirrels live on trees and may only occasionally come to the ground to forage for food, if at all.
The first sight of this squirrel sent a shiver of joy through me. It is incredibly cute, with a rust-red-brown body, two small flaps of velvet for ears and an off-white furry tail, a little longer then the length of its body. This one was nibbling on a fruit high up on the branch. The paparazzi was again at work! After spending some time with the first squirrel we saw, we proceeded ahead. We saw many squirrels thereafter, each, invariably nibbling away at some fruit. One squirrel that we spotted was just about 15 feet away, on a low branch. It was nibbling on a fruit, looked up at us, from time to time and nibbled away thinking we were not much, worth giving attention to!

We saw purple Karvi flowers which bloom only once in seven years. I didn't know these grow in forests too and had thought it was unique to Kaas. Different kinds of fungi made me stop and marvel at Nature’s infinite beauty.

Another interesting insect was the Jewel Beetle. My college campus abounded with these insects and I used to spend long hours gazing at them on the pretext to studying in the garden. With an iridescent green with tinges of yellow body and a bright orange belly, it is indeed a gorgeous self-propelled jewel.
After walking in the forest for four hours, we went to the Blue Mormon resort for lunch. After we had finished eating, the staff of the resort alerted us about an Atlas Moth which was resting in the backyard. We scampered to where it was resting.
I had seen the Atlas Moth earlier too in The Rainforest Retreat in Karnataka. Atlas Moths are amongst the largest with a wingspan reaching upto 12 inches. They have stunning intricate patterns on their wings and live only for upto two weeks of spreading their wings.

Just as we were satiated with the Atlas Moth, another staff member informed us about Moon Moth, named so, maybe because of its soothing moon-like appearance. There were other brilliantly patterned moths on the same wall of various colours and sizes.
Feeling deeply grateful to the main forest creatures that presented themselves to us, we left in the evening with contented hearts, smiles on our faces and cameras full of pictures. It was indeed a memorable trip.

Posted by Priya Krishnan Das at 00:12 No comments:

Volunteering for Art at The Rainforest Retreat

Rainforest Retreat is an eco-lodge in South India which practices agro-forestry and responsible tourism. I had gone there as a volunteer and while I hand-pollinated vanilla flowers in the mornings, I painted the wall of the cottage where I was put up during the rest of the day. I took reference from the beautiful bio-diversity that is found in the lovely place. The mural was 13 x 7 feet and covered almost the entire wall. :-) 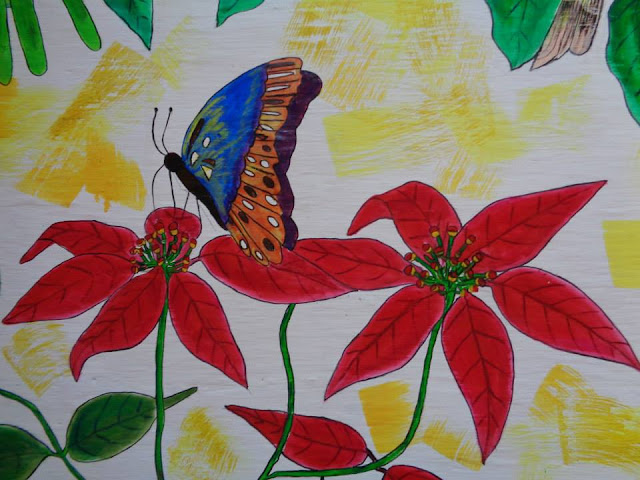 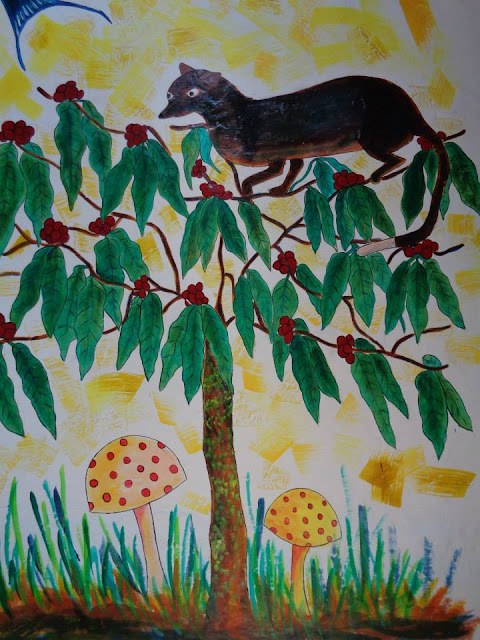 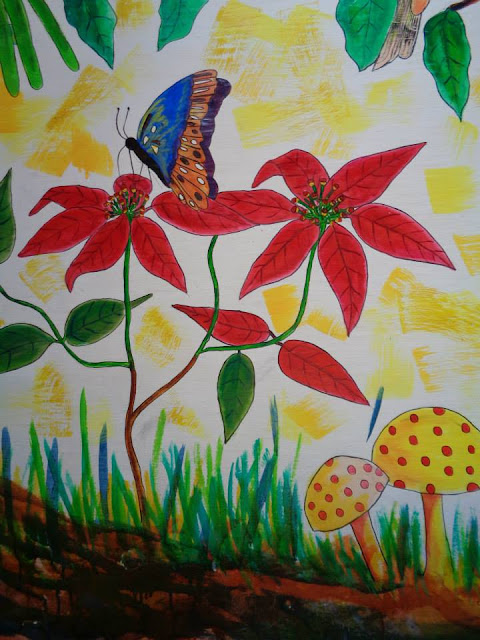 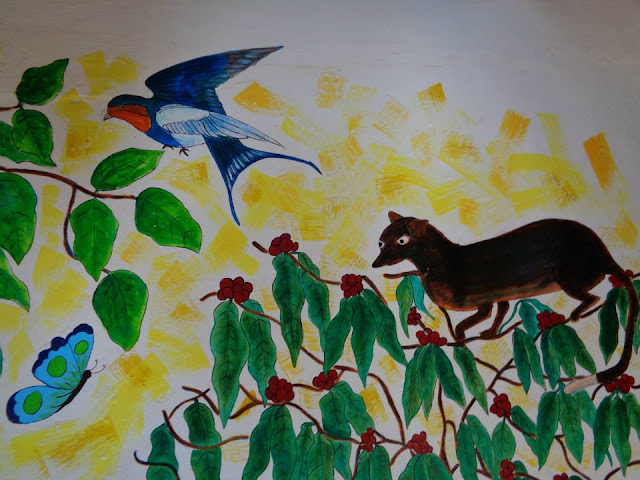 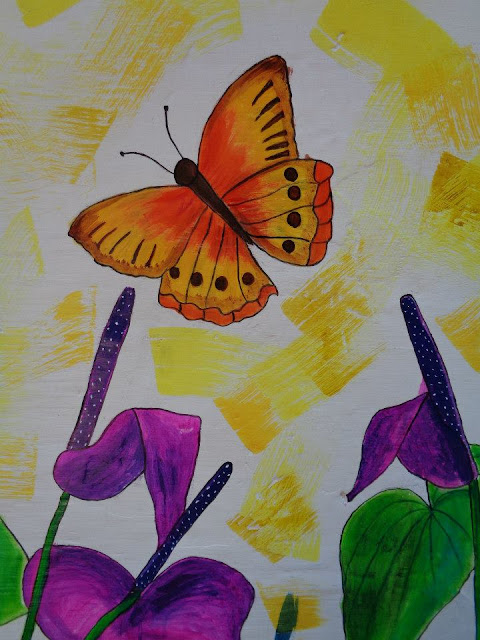 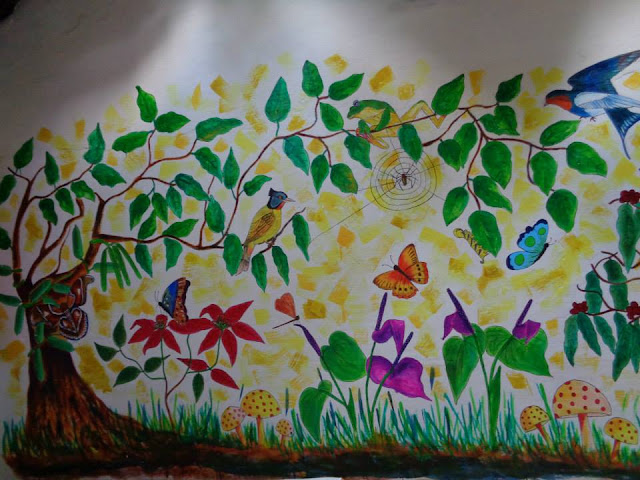 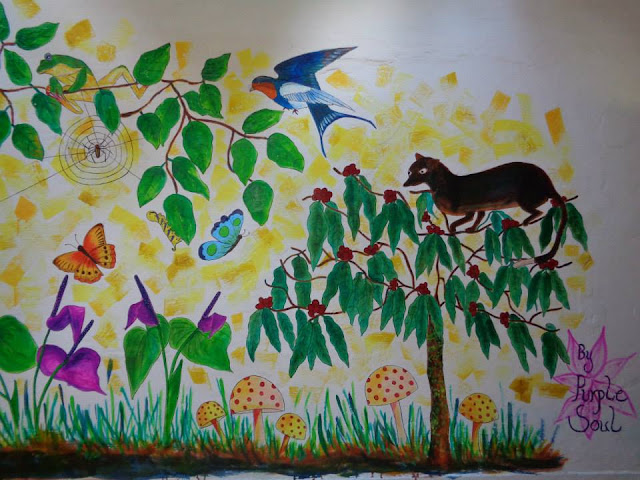 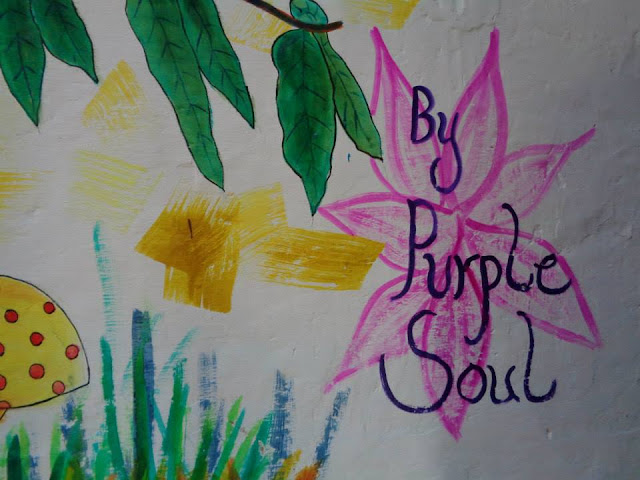 Posted by Priya Krishnan Das at 02:23 No comments:


When the bug for volunteering at a coffee plantation bit me, Sujata Goel of the Rainforest Retreat was the only one who promptly reverted from the 10 odd mails I had sent to different plantations. And I'm so glad she did. Since the coffee harvesting season was over and April would be the time for vanilla pollination, she asked me if I would be okay to club volunteering for vanilla pollination and art work in one of their cottages. I screamed a 'yes' over email and did a little jig!! This was the cherry on the cake!! The owners, Sujata and Anurag are such warm, loving and wonderful people and that adds to the charm of the place. The plantation is like a fairy land, with exotic flowers, trees with gnarled roots and vines and creepers adding an asymmetric beauty to everything around. The accommodation too has a rustic charm, blending in perfectly with the surroundings. A special word of mention for the staff, Ravi, Mariamma and Subbu who go out of the way to ensure that your stay is comfortable. I saw them attending to the other guests with impeccable courtesy and promptness and with me too. The food is sumptuous, hearty and organic, and most of the ingredients are straight from the farm and I overate each time. I was touched and inspired by the enthusiasm and the love that Sujata and Anurag and the staff have for the plantation. They also explained various aspects of bio-diversity that left me amazed at Nature's intelligence. If you happen to stay at the Plantation lodge, you will see my wall-art inside the cottage, signed off as Purple Soul. Read my post about vanilla pollination while I take you through my most memorable stay through these pictures..:-) 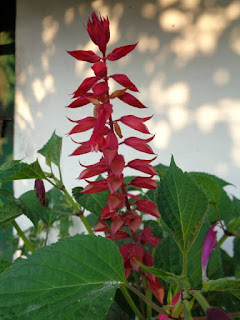 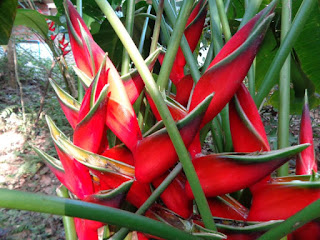 The whole place was full of exotic flowers and birds and of course many creepy crawlies!!