I read about the Wild Vegetables Festival in the newspaper. It was organised by an NGO called Kalpvriksh, which I had heard about so I knew it would be worthwhile. The festival was organised over three Sundays, one of which I had already missed, the second was at Kharpud, where an estimated 500 people were to arrive. I decided to skip that. The third and the last was to be at Bhomale, 93 kms away from Pune, the farthest of the three, so I knew there wouldn’t be much of a crowd.
Since hiring a cab would have been too expensive for me alone, I spread word about it asking if there are people who want to join me. I promptly received confirmations and on 24th September at 7 a.m a group of us 6 girls set out for Bhomale.
You may like my blog post on Cuisine of the Lepchas in Dzongu.

We stopped for breakfast at Swayamvar Pure Veg. Here's the location on Google maps. It’s useful mentioning these things in case there are others who want to stop. The toilets were clean and the vada-pav was delicious J

At around 11.30 we reached Bhomale and were met with a sight of all villagers assembled under a canopy of trees with their dishes arranged beautifully with flowers. I met the coordinator from Kalpvriksh, Pradeep Chavan, whom I had been in touch with and sat down for the event to begin.

Bhomale, is a village with a population of around 150 in 35 houses. Many generations ago the tribal people of this place called Mahadev Koli, were hunters and gatherers and practiced no agriculture. Now-a-days, people have their kitchen garden where they grow vegetables like pumpkin and ridge gourd. Outside of the forest limits, people have plots of lands where they grow finger millet, rice and barnyard millet. But I was told this is a more recent trend. People still gather from the forest surrounding their village.

From the months from June to September, during the Monsoon, is the peak time when the forest is bountiful with wild vegetables, berries, nuts and roots. Bhomale sees heavy rainfall every year (around 1000 mm), but that notwithstanding people venture into the forests to gather food. Any excess produce is dried or cured and preserved for the other months when forest supplies are scarce. Because of the climate, the wild vegetation is also unique to the place. Of late, people have also started buying cultivated vegetables and grains from the nearest shop which is a 30 kms walk!

As is the custom traditionally In India, men and women were seated separately for the event. I turned to observe the women seated beside me. It was a special occasion for the village, since it was a Wild Vegetables Festival and people like me from the cities were visiting. So they had worn their best sarees, most draped in ‘navvari’ style (‘nav’ means nine), where the nine-yard saree is draped like a dhoti on the lower part of the body. They had also worn a nose ring very typically Maharashtrian, called the ‘nath’. They all looked beautiful J 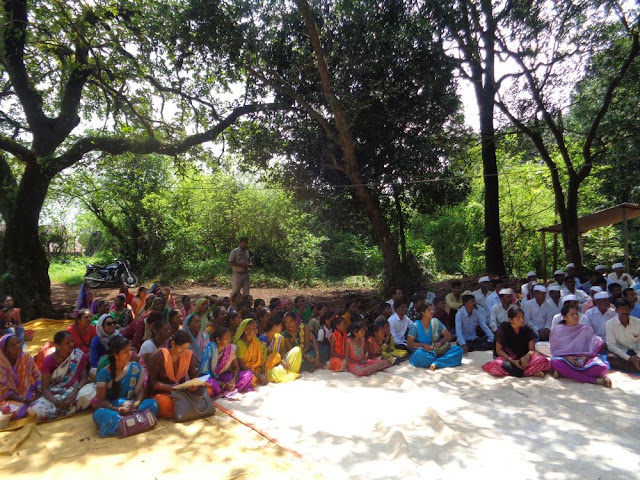 It’s needless to say that I had been eyeing the plates laden with food since the time I arrived. So I took a few close up pictures and enquired with the women as to what the vegetable were.
After some time, the main event started, with Chief guests, speakers, welcome songs so on and so forth.


One of the forest officials, V.P. Kadam, gave a very impressive talk on the bio-diversity of the place and the importance to preserve the culinary heritage. Falling for false aspirations’, the village people have stopped valuing the food which their communities have been eating for ages and have started to increasingly buy common vegetables from the market 30 kms away. He said if the people don’t uphold their culinary and food heritage, it will be lost to the generations to come. He reinforced the importance of being proud of what they have- something the city people envy- clean air, proximity to the forests and food provided by the forests which is completely devoid of chemicals or adulteration.
Since these are uncultivated foods, he also stressed that people who want to sell the forest produce must be mindful of the way they harvest, so as to leave the seeds and stalks for the produce the following year.
You may like my blog post on Kumaoni cuisine.

After his talk as well as by some other people including village people, we formed a queue to sample the food which was now moved to the table. There were around 15 different kinds of dishes prepared by the women and we were given samples of it on plates. The dishes tasted very unique and some were hot on account of the chilli powder used liberally! 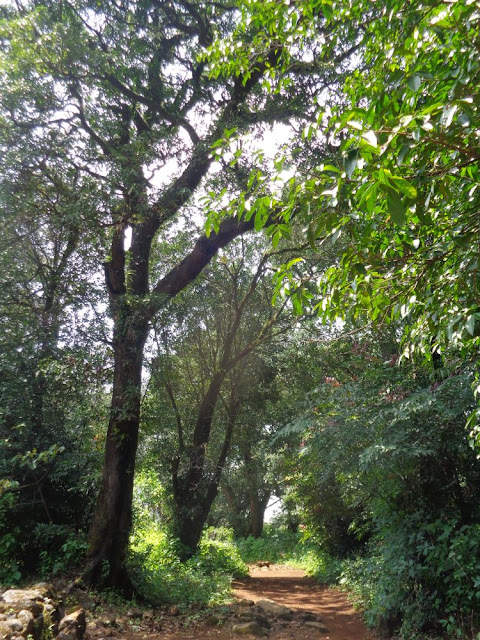 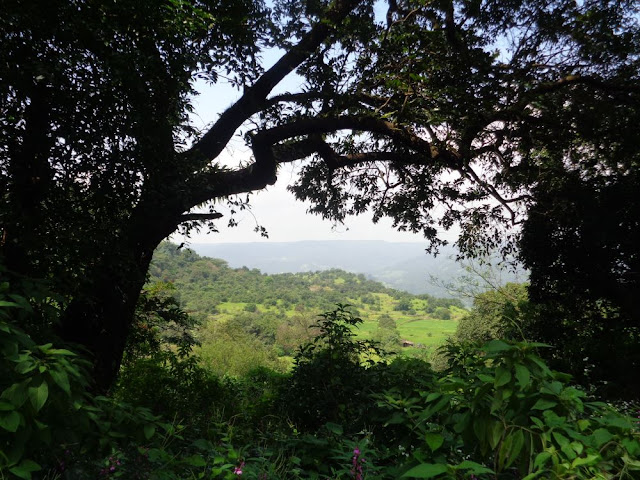 After the sampling, we were invited for a proper lunch of rice, daal and curry to another place. After the crowd left, I spent some time sketching the dense green forest beyond the temple. The temple is of Lord Bhairav, a form of Lord Shiva and women are not allowed to enter inside. Beyond the forest is what is called ‘Devraai’ in Marathi, meaning ‘garden/orchard of the Gods’- ‘Dev’ meaning God. Devrais are believed to be presided over by forest deities and nymphs and no one can take away even a twig or a leaf from the Devrai, leave alone cutting trees. Doing so would be a gross violation to the forest deity and would invoke their wrath which is not a good idea since these people subsist on the forest surrounding it. This belief has ensured the survival of these forest pockets which have been around for thousands of years and has survived the greed of land sharks. As outsiders, we were instructed to not even go near it. I wanted to do some sketching of the Devrai so I chose a spot near the temple for a better view and I was asked to move farther away.

I was inspired to draw the Forest Nymph after visiting Bhomale, so here's my illustration posted on my Art page, Purple Soul. 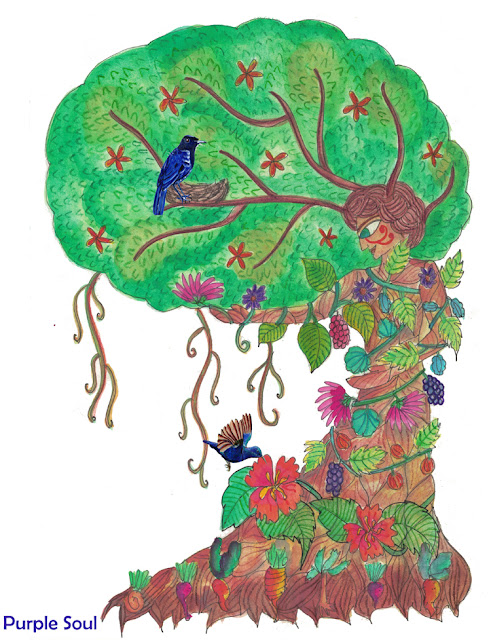 I did a quick sketch and soaked up the green view as much as the time constraint would permit and joined the rest of the group for a meal of rice, daal and dried peas curry. Most of the people were almost finishing so I joined the forest officials. The women had reserved some extra portions of the wild vegetables for the forest officials and since I was seated with them I got a second generous helping of those.
After lunch, we visited the home of one of the women where I asked to see the uncooked wild vegetables. They said that all that they gather is eaten the same day, excepting the ones that are dried and cured. They showed me a few of those. I hope to go some day with them to gather food and document that too.

I bought some finger millet and barnyard millet from them which are completely organic in the truest sense. And came back home with a refreshed mind and heart and belly :-)

Posted by Priya Krishnan Das at 03:28