My Experience with Kalaripayattu

Having taken a keen interest in learning martial arts since 2016, after beating up a molester (who had groped another girl), I was fascinated by the different forms of martial arts around the world. I tried my hand in kickboxing, Kyokushin Karate (which I learned till I got my green belt) and Krav Maga (Israeli self-defense). And then I read up about Kalaripayattu, which is considered the most ancient form of martial arts, originating in none other than my own country, India. After contacting several ashrams that teach Kalari(short form and easier on the tongue), I zeroed in on Hindustan Kalari Sangam in Calicut.   There were no reviews of any Kalari ashrams on the net, so I just went ahead with one of the few ashrams that responded to my query.

You may also want to read my post on Kalarichikitsa

Since I was traveling to Kerala, I visited my Kuladevi in Manappully Kavu in Palakkad and then proceeded to Calicut. I reached Calicut by train from Palakkad. A Rs 50 ride in an autorickshaw took me from the railway station to Hindustan Kalari Sangam. I was greeted by Dr. Krishnan Lal who is the wife of Radhika Gurukkal (the daughter of the founder of Hindustan Kalari Sangam) and taken to my room.

The premises of the HKS (Hindustan Kalari Sangam) comprises a building with rooms for students  of Kalari and patients for Kalari Chikitsa, the house where the family that runs the ashram lives, the Kalari, where the art is practiced and another single storied structure where Dr. Lal and his assistants see and treat patients.

Hindustan Kalari Sangam, is an ancestral Kalarippayattu training center and Ayurvedic healing centre established during the year of 1950, under the patronage of Guru Veerasree Sami Gurukkal. Currently, it is run by his children Lakshmanan Gurukkal and Radhika Gurukkal.

Kalaripayattu is a combination of two words, ‘kalari’ which means the space where the training is conducted and ‘payattu’ which means action involving performance or combat. Kalaripayattu as practiced in its current form can be traced back to the 18th century by the verbal commands used in language during that period. But there has been evidence of Kalaris from the 12th century. There were numerous provinces in Kerala during that time and each province had its own army trained in Kalaripayattu. There were no caste restrictions in Kalari and literature from earlier periods refers to people from all backgrounds practicing the art form.

The British had banned Kalaripayattu for around 300 years because they saw how fearless the Kalaripayattu practitioners were. But a few masters kept the art alive by practicing in secrecy and passing the knowledge to the next generation. And after Independence thanks to those brave masters there was again a slow albeit sure revival of Kalaripayattu.

The Kalari (the place where Kalaripayattu is practiced) looks like a typical Kerala style temple and is constructed as per Vastu Shastra and tantric traditions of Kalari. Inside, the floor is 7 feet below ground level and is dark like the garba gruha (sanctum sanctorum) of a temple. The area of the Kalari is 42 feet in length and 21 feet in width and can be made smaller or bigger in the same ratio. The Kalari is constructed to stand in the east-west direction with the entrance facing east. The floor is just the mud leveled up. Once a year the mud is dug up and freshly patted down. The dark interiors serve to aid focus and a meditative state during the practice of Kalari because the aim of Kalaripayattu is not brilliance in martial arts but rather lead the disciple on the path of 'moksha' or liberation.

The minimum age to start Kalari practice is 7 years, although I saw some children who looked younger than that, attend class. The initiation usually happens on an auspicious day like Vijayadashami. I myself got to experience a glimpse of the ancient ritual on the 1st day of my class. On the first day, I was asked to step into the Kalari area with my right foot first as we do for auspicious occasions and then touch the Kalari floor in reverence. Then I was led to the main altar of Khaloorika Devi and then the oil from the altar lamp was applied to my head and arms as a mark of initiation. I then had to offer Guru dakshina wrapped in a betel leaf to the teacher who is referred to as Gurukkal and then touch his feet. The kalari area where the art is practised is considered the sanctum sanctorum or 'garba gruha' as in a temple and the Kalari practitioner is the priest or the devotee who offers himself to the higher power through the Kalari practice. The Kalari sessions start with an elaborate salutation to Khaloorika devi and every time we step in or out of the Kalari area we touch the floor with reverence. 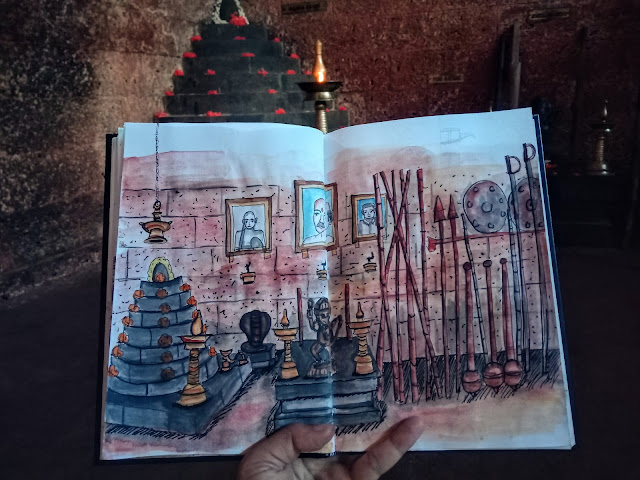 Another thing I will never forget is my first few minutes of the first day of class. I was the first woman to enter the Kalari area and there were other students, boys and men, with nothing but a loin cloth for modesty, vigorously applying oil on the bodies. I was a bit embarrassed and didn’t know where to look. Soon after, the other women students came along and I was relieved and also got used to the sight the remaining days. Students apply a herbal oil all over their body before practice, although I did not do that. The oil stimulates the 'vata' energy according to Ayurveda which is beneficial to the Kalari practitioner.

There are different stages of training in Kalaripayattu.

First is Meipayattu which translates to training the body.  Students are trained in unique body movements  which work the spine and the development of grip and postures of the body. Kalaripayattu includes a lot of animal movements and postures inspired from lion, cat, boar, snake, elephant, etc and due to this requires one to be in more of a horizontal posture during most of the practice. Which means your quads and hamstrings will be tested to the maximum. This horizontal posture is vital for the flow of energy through the chakras efficiently.

The second stage is Kolthari where the usage of various wooden weapons is initiated and practiced during this stage of learning. In Kalaripayattu the weapons are considered as extensions of the body, whereas the body itself is perceived as the prime weapon. Various wooden weapons used in the stage of Kolthari are, Kettukari (Long stick), Cheru vati (Short stick), Otta (Curved Stick) Gada (Mace).

Ankathari is the next and important stage in the training sequence as heavy metal weapons are used. The term Ankam means a combat or a war. The metal weapons used in this stage are the same weapons that were used in war in the earlier times.  It is considered to be the longest and most important training stage among the four. This stage requires strength, agility and precision in rendering the practice and delivering the combat. The main weapons are Vaal (Sword), Paricha (Shield), Kuntham (Spear), Kattaram (Dagger), Urumi (Flexible sword). I had the opportunity to see Radhika Gurukkal and Sajith Gurukkal do a sparring session with Urumi. The Urumi is unique to Kalaripayattu. It is a steel, double edged flexible whip and sword and is about 6 feet in length. It is tied to the fighter’s waist as a belt and is removed when it has to be put to use. Because it’s a whip, wielding it with precision takes years of practice. The two people sparring leaped almost 4 feet up in the air (almost an act of levitation) wielding the Urumi which created sparks and sound as the blades struck against each other. Their movements were so graceful, yet so precise and strong.

The last stage in the Kalari training is Verum Kai which means bare handed. Unlike other forms of martial arts like Karate or Taekwondo, where the training starts with bare hands and then progresses to weapons such as nunchaku or sticks, in Kalari, bare handed combat is reserved only after one has mastered weapons. The Verum Kai techniques are practiced along with the knowledge of Marma Saariram, the knowledge about the vital points of the body. It is considered that there are 108/109 vital points in the body where the life energy is concentrated. Striking some vital points can be fatal whereas some points are struck for hurting, some to make the other unconscious during combat. This system of practice is the integral part of the fourth stage of Kalaripayattu training.

There are considerable differences in the North Kerala and South Kerala traditions of Kalaripayattu. Hindustan Kalari Sangam practices the South Kerala style which focuses on Meipayattu more than the Northern style. Since Kalaripayattu is no longer required for combat these days, it has evolved into more of a performing arts. While I was there, there were people from the theater and dance background who had come to learn Kalari. So this ancient martial arts form has adapted to find a place in contemporary dance and theater too.

I was there for 8 days and there were classes morning and evening for 1.5 hours each. Although I enjoyed the classes a lot, the heat and the humidity got to me (ironically in the ‘winter’ month of December) and I had a nasty sore throat with the continuous sweating. Although I had plans to go back for the longer training, I won't because I have low tolerance for hot and humd weather.. However, if there is Kalaripayattu training in Pune, I would be most eager to enroll for a long term period.

The accommodation is basic. There are fans and no AC. The dining is in the main house where the family lives and the food is simple and delicious, made in the local way. I ate a lot of bananas and sweet pineapples while I was there. I was amazed to see how the younger Gurukkals like Sajith who were Kalari instructors and also doubled up as Kalarichikitsa interns to Dr. Lal worked from morning to night, ate the same simple food and kept so lean and fit with not a shred of fat on their bodies. However, I noticed that there were some other instructors as well as students who were very flexible but did not fit the normal description of ‘fit’.

Posted by Priya Krishnan Das at 06:00