It was sometime in the second half of 2018 that I read about a small community run library called Garung Thuk in a tiny village in Arunachal Pradesh. While usually I spend many months of research on my solo travel destinations, I was immediately intrigued by this unique library located in a tiny village called Shergaon. After scouring the net for some contact number I found one on a Facebook group. It belonged to Dr. Lobsang Tashi, who is one of the founding members of the library.
Soon, I planned my itinerary with him, booked my flight and found myself in a picturesque village nestled in a valley. Dorjee Khandu Thungon, another founding member of Garung Thuk remarked, “Bollywood goes abroad for scenic locations and the North-east movie makers come to Shergaon”. And I could understand why. Being in the temperate region, Shergaon experiences four distinct seasons and I had visited in Spring. Everywhere you looked was a picture postcard shot, with oak trees sprouting tender red and green leaves, birds chirping and serenading their mates, bees and butterflies buzzing about pollinating flowers, the mountains standing guard in the background and a river gurgling across.

Shergaon is home to the Sherdukpen tribe who are spread in the villages of Rupa, Jigaon and Shergaon. Around 1000 members of the tribe reside in Shergaon and everyone knows everybody else in the village. Originally from Tibet, having migrated this side hundreds of years ago, they follow TibetanBuddhism along with their Animist practices.

The Sherdukpens are a very closely knit community with an incredible sense of pride in their tradition and culture as I discovered over the period of my stay with them. And it is to maintain this very fabric of their culture that Garung Thuk, a non-profit organization was established in October 2014. And this is evident by the name, Garung Thuk, which means ‘our village’. 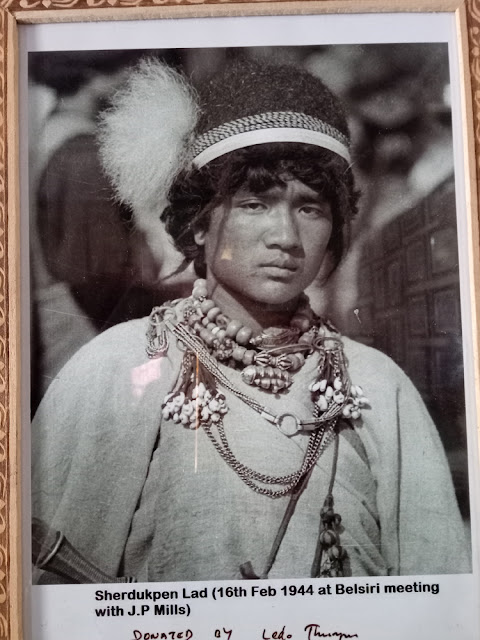 The Sherdukpens were primarily hunters and gatherers who also practiced agriculture. Although now, the main source of income is agriculture and horticulture with hunting being banned by the government. With changes happening in society in the tribal cultures, and with the passing away of the elderly who are the repositories of knowledge and ancient wisdom, a group of like-minded people like Lobsang and Dorjee established a community-run center that would not only promote culture and tradition but also preserve the bio-diversity of the region.

In 2015, with one of the leading publishing houses in India, they did a fund raiser through a crowd sourced campaign which generated Rs 45000 with which they could buy a multitude of books for children of various genres. Thus Garung Thuk also became a community run library. And what was very unique was the manner in which they inaugurated the library. Instead of inviting prominent personalities or politicians as chief guests they asked the students, the direct beneficiaries, to inaugurate the library.
Garung Thuk is at the lead for creating awareness about the rich biodiversity of Shergaon so that the younger generation are not only aware about it, but also take pride it in and preserve it. One such initiative was adopting a stretch of the river called Choskorong Kho for five years starting December 2014. They did a fish riverine ranching program where they released 500 fish fingerlings with the help of the fishery department. Felling of trees and fishing is banned along the riverside and in the river thus allowing them to regenerate with fish and the other fauna around it like birds and butterflies.

Other activities pertaining to the environment are:

Workshops on mushroom cultivation- Shergaon has a wealth of mushrooms. While ambling around the village with Lobsang, we spotted a few women collecting the very rare mushroom Marcella (Sherdukpen name is ‘Mubung Shruk’) which sells for an exorbitant price of around Rs 2000 per kg on account of its rarity. But because it’s so scarce people don’t sell but consume it themselves. On a trek to a mud fort another day, we chanced upon the dork eared fungus. We gathered it, took it home and just nibbled on it after washing it. Apparently it tastes delicious when cooked with fish.

Extensive tree plantation drives are conducted as part of which the community has planted around 2000 trees since its inception. This includes plantation of fruiting trees such as peach, plum, etc, as well as oak trees.

Workshops for teaching how to make bamboo cups and mugs so that plastic can be eliminated. In fact traditionally before the infestation of plastic, bamboo was extensively used for crafting cups and mugs and the community is reverting to its roots.

Garung Thuk also periodically invites experts on birds and butterflies to organize workshops for the community on identification and habitat of the same to create awareness and pride in the local fauna and flora. An extension of this is photography workshops to facilitate documenting the species of flora and fauna by the community as a whole.

With the markets getting flooded with cheap powerloom fabric and readymade garments handloom, as everywhere else in India, had been getting sidelined even amongst the Sherdukpen. Thus the center is doing a commendable job of reviving handloom. As part of this initiative expert weavers are called from other states to give inputs of improvisation of the loom and the group of weavers brain storm on how traditional wear can be made contemporary to keep pace with the changing times without losing out on their authenticity. I saw some excellently handwoven bags, stoles, skirts, etc.


A recently started initiative is the community run homestays where guests can experience traditional Sherdukpen cuisine, culture and the pristine beauty of the village.

A very important aspect of the Sherdukpen tribe is ownership of the forests as a community. Forests are considered to be sacred by the Sherdukpen and forest conservation is deeply embedded in their culture. The community takes turns to use the fallen and decaying oak leaves from different areas of the sacred grove to use for mulching in agriculture. Since it’s a sacred grove it follows naturally that felling of trees does not happen. It is this sense of reverence towards nature and the community based ownership that ensures that a healthy balance between nature and Man. Read more about the close relationship of the Sherdukpens with Nature in this blog post.

To promote and preserve their culture, the members of Garung Thuk have converted an old traditional wooden house into a museum where traditional home utensils and agricultural equipment of the yore are displayed. A slice of life from the past is thus preserved so that the younger generation can relate to it and visitors be awed by it.

Garung Thuk also preserves its culture through an annual festival called Kro-Cheykor in which the entire clan of the Sherdukpens regardless of their age participate with full gusto. The festival is a beautiful example of how Animist and Buddhist traditions co-exist. The rituals and dance which have been in practice for hundreds of years are kept intact through this festival. The younger generation even receive training on the dance moves and songs for a dedicated period of time from the elders in the months preceding the festival. Traditional food including wild berries, roots and fruit foraged from the forest are served with copious quantities of the locally brewed beer. This is the time when each member of the clan, dresses up in traditional attire, complete with the Sherdukpen hand woven bag and necks bejeweled with big coral and turquoise beads. The Kro-Cheykor festival was started by the great monk Doyan Tanzing and commences on the 25th day of the 3rd lunar month and the main procession is taken out on the full moon day of the holy month Saka Dawa, the 4th month. During the 20 day festival, all deities are invoked and their blessings are sought. They are also given a beautiful farewell through a song called Lurjaang in which the first few lines are dedicated to the great monk. After the farewell, the deities retire to their respective resting places thus bringing an end to the fun and festivities.

The center also organizes interesting workshops such as the one on Bhoti script to reacquaint the younger generation to their roots and culture. Other commendable initiatives include organizing medical camps, eye checkup for elders and cataract removal, water tank clean ups and the like.

I had originally written about the Garung Thuk for The Better India  in September 2019. Reading my article, the Hyderabad Literature festival 2020 got in touch with them and they were awarded the  Innovative Library award in India Reading Olympiad organised by Food4thought foundation on 26th January,2020. I am so happy that I could contribute in some way to them.

Garung Thuk is a shining example of how a community together can live life based on ancient principles and harmony with Nature. Of how in a world becoming homogenous in some aspects by what we could call a wave of ‘modernization’, tradition and culture can still survive and be embraced by the younger generation. In that way Garung Thuk provides a proverbial bridge connecting the old with the new, the ancient and the modern. And it does so remarkably well. The Sherdukpens are an incredibly warm people and excellent hosts. I was happy I trusted my instinct and travelled to this quaint village, the happy memories of which will remain with me forever.

Posted by Priya Krishnan Das at 05:53